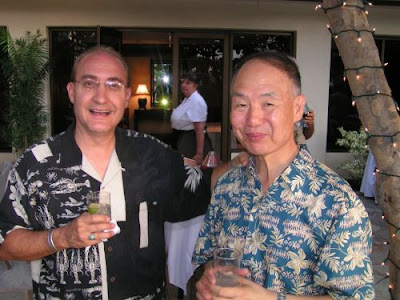 Rear admiral Yang Yi having a good time at the 2005 U.S.-China Strategic Dialogue

China must have strong navy

BEIJING, Dec. 2 (Xinhuanet) -- China's navy began a drill in West Pacific in late November. On Tuesday, China's aircraft carrier set sail on its second trial run. The two were independent developments, for the aircraft carrier is yet to be commissioned by the navy. But some Western countries have put the two together and began chanting the "Chinese navy threat" slogan all over again.

What they have forgotten is that about 70 percent of the Earth's oceans are international waters, and all countries have equal freedom and rights to navigate and hold military exercises there.

China is a large country with a long coastline. In the past century, the majority of invaders entered China through the seas. For a long time after the founding of New China, the country faced military threats from some big powers and thus had to concentrate its efforts on strengthening its defense on the land borders. Hence, China's navy didn't get the needed attention and lacked an independent strategy, acting as it was in concert with the land and air units in non-amphibious operations.

It was not until the early 1980s, when Liu Huaqing became the commander of China's navy and proposed to work out a naval strategy and later outlined the strategy of offshore defense, that the navy began building its weaponry, holding exercises, training talents and focusing on modernization.

Nevertheless, West-led voices with the United States at the helm, have been criticizing China's military modernization as a "negative variable" and labeling its navy's modernization a threat to regional and international stability. This is ridiculous.

The truth is the increase in China's military spending in recent years has its historical roots and reflects the country's actual need. In the earlier days of reform and opening-up, China prioritized economic development. As a result, national defense didn't get the attention it deserved and its navy lagged behind not only developed countries, but also some small- and medium-sized developing countries.

By increasing its military expenditure in recent years, China has modernized its army to a certain extent. But the armed forces have to be made stronger to safeguard China's national security and protect all its interests. China's navy still lags behind those of the advanced military powers such as the US by 20-30 years.

Despite all this, the West has maintained its high pitch against China as a "military threat". The fact that the global financial crisis has created structural changes in the global strategic layout with China overtaking Japan as the world's second largest economy and expanding its global reach, has made the West cry wolf more loudly.

The China "military threat" theory is simply much ado about nothing. China has developed closer ties with the rest of the world in the 21st century. And since its economic growth depends largely on foreign trade and supply of energy from overseas, it is essential that it develops a strong navy to protect its maritime traffic. Truth be told, the Chinese navy now is not competent enough to fulfill that historical mission.

The lack of aircraft carriers had undermined the competence of China's navy in guarding its shipping routes. China is the only one among the five permanent members of United Nations Security Council that doesn't have an aircraft carrier in service.

With a coastline of 18,000 kilometers and thousands of islands and shipping routes to defend, China has more than enough reason to build its own aircraft carriers, and other countries cannot direct it on the issue.

It is a common practice among countries with coastlines to conduct maritime drills. The US holds dozens of such exercises every year. Plus, it conducts joint war games with its allies. Other major naval powers, too, hold maritime exercises every year. So how come only China's routine naval drills are seen as "threatening"?

The US has established a vast network of military bases across the world. Wherever and whenever there's a conflict, the first question US leaders ask is where their nearest US aircraft carrier is. The US operates its warships worldwide, apparently as deterrence and to portray itself as the champion of freedom of navigation. One wonders what makes the US' navigation justified and China's disturbing.

The Western media allege that China's latest naval exercise in the West Pacific reflects its stance against the deployment of American troops in and around Australia. What they fail to see is that China's naval drill is a routine matter, based on its annual plan, aimed at improving the navy's ocean-going ability, and not targeted against the US or Australia. When will they believe that China is not a threat to any country and has no intention of becoming one?

China will continue to conduct military drills in the West Pacific and other waters to make its navy competent enough to safeguard national security and interests, and to fulfill its international obligations.

China has been reiterating that it wants peaceful development and will continue to have a defensive defense policy. China has no designs to become an expansionist power and will never follow the West's gunboat diplomacy.

China has been sending its navy on convoy missions in the Gulf of Aden and the waters off Somalia since 2008, and has been praised by the international community for that. Having a strong military will only help China make greater contributions to regional and international security, stability and prosperity.

The author is a rear admiral and former director of the Institute for Strategic Studies at the People's Liberation Army National Defense University.