The next round of Brigadization.

Here is a perfect development to start off the New Year – the across the board China Military brigadization. For the past few months, we have been noting tip-bits of units, either regiments or divisions, are becoming brigades and the recent PLA Daily news articles seem to have confirmed some of brigadization tip-bits.

What we know thus far:

--All the China Army Aviation (helicopter) Regiments are now Brigades.

--All the China Army Armor Divisions are now divided into Armored Brigades and/or Mechanized Infantry Brigades.

--The China Airforce Air Divisions (Bomber, Attack, Fighter, Recon) are either reformed into Brigades/Battalion (Wings/Squadron???) or Bases. The goal is be able to max-and-match different birds to tailor better on mission requirements.

Will keep you posted on further developments


Recently, an aviation brigade of the air force of the Chinese People’s Liberation Army stationed in Xinjiang conducted a round-the-clock flight training to ensure that new equipment and new personnel form combat effectiveness in the same year they are deployed. (PLA Daily/ Zhang Shuhua)

For days in a row, the helicopters of an army aviation brigade of the Xinjiang Military Area Command (MAC) of the People’s Liberation Army (PLA) rescued the people stranded by the snowstorm in the mountainous area of Altai. The picture shows the crew members are unloading relief materials from the helicopter.

A leader of the brigade said that although the amount of the airdropped materials was not huge, they helped to strengthen and build up the confidence and strength of the people in the disaster-stricken area to overcome the difficulties.

(Source: PLA Daily) 2011-12-26
http://eng.chinamil.com.cn/news-channels/china-military-news/2011-12/26/content_4753774.htm
Focusing on the development requirements for a modernized strategic air force, the Logistics Department of the Air Force of the Chinese People’s Liberation Army (PLA) is making every effort to build multi-type aircraft support bases. At present, a logistics support system adaptable to the needs of future air combat is taking shape.

A few years ago, personnel of the Logistics Department of the PLA Air Force were confronted with a severe challenge: future air combat should be featured by systematic confrontation between multi-type aircraft rather than between single-type aircraft. However, for a traditional airfield and station, there was basically one airfield in one air field and station, and only one runway available for only one type of aircraft.

So the PLA Air Force organs made a resolute decision that air field and station should be transformed into comprehensive support air base that can support multi-type aircraft and serve as the basic dependence and fighting entity for command, control, support and independent operational tasks.

After investigation and survey, the Logistics Department of the PLA Air Force, in line with the guideline of "nationwide deployment, all-border access all-area response", focused on flight support, expanded support functions of airfield and enhanced comprehensive multi-type aircraft support capability.

With years of efforts, the air base construction has made critical breakthroughs one after another. A good number of comprehensive support bases and multi-type aircraft support bases were completed in succession. In addition, support facilities of over 100 support bases for basic tasks and back-up support bases have been improved. A scientifically-distributed national network of air bases has basically been shaped. 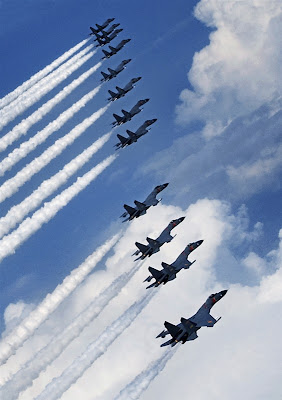 Posted by Coatepeque at 1:30 PM