China to take part in Vostok-2018 strategic drills in Russia

In another related news, China will send 3,200 personnel to yet another drill in Russia in Sept 11th.   Vostok-2018 is much larger in scope comparing to the Peace Mission-2018 below 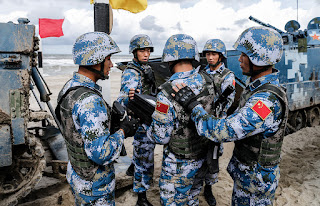 China to take part in Vostok-2018 strategic drills in Russia

According to the Chinese Defense Ministry, the drills are aimed at strengthening strategic military partnership between China and Russia

MOSCOW, August 20. /TASS/. /TASS/. China will take part in the Vostok-2018 (or East-2018) strategic military drills in Russia, the Chinese Defense Ministry said in a statement on Monday.

"In accordance with an agreement reached by China and Russia, the parties will hold joint military drills at the Tsugol training range in Russia’s Trans-Baikal Region on September 11-15," the statement reads.

According to the Chinese Defense Ministry, the drills are aimed at strengthening strategic military partnership between China and Russia and increasing the two countries’ ability to jointly respond to various security threats, ensure regional peace, stability and security.

China’s Defense Ministry said the drills would involve about 3,200 Chinese military personnel, more than 900 pieces of weapons, as well as 30 helicopters and fixed-wing aircraft.

The Vostok-2018 drills, scheduled to take place in August and September, will involve Russian troops deployed to the Eastern and Central Military Districts, as well as the Northern Fleet.

Posted by Coatepeque at 8:18 PM