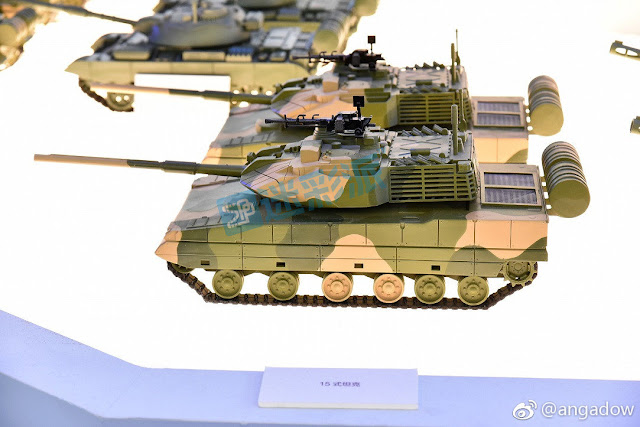 Pictured is scaled model of China's Type 15 light tank at the National Museum of China as part of a grand exhibition to mark the 40th anniversary of the country's reform and opening-up in Beijing on Sunday. Photo: Liu Xuanzun/GT

China has recently unveiled its new 30-ton-class light tank, the Type 15, with experts saying it can outperform other Chinese tanks in combat operations in plateau areas like Tibet while also holding advantages in island landing missions.

Wei Dongxu, a Beijing-based military analyst, told the Global Times on Sunday that "the Type 15 is equipped with a 105-millimeter main gun capable of firing armor-piercing rounds and gun-launched missiles, making its firepower not much inferior to a heavier main battle tank."

Compared with the Type 99 and Type 96, two main battle tanks in service of the People's Liberation Army, the Type 15 is significantly lighter, weighing about 32-35 tons, Wei said, noting that its engine can provide 1,000 horsepower driving force.

Because of the tank's light weight, it is easier to operate on plateau, forest and water-intensive areas, he said.

Another military expert, who asked not to be named, told the Global Times on Sunday that the tank is a great choice for China's southern area, given its mountainous terrain there.

The Type 15 can also be quickly deployed in Southwest China's Tibet Autonomous Region if border dispute reoccurs, the expert said.

He referred the Type 15's light weight as advantage when compared with heavier ones in the past.

Although the Type 15 was spotted several times by Chinese citizens in the past, this is the first time that China officially introduced its latest light tank.

In July, a tank suspected to be a Type 15, which was painted with naval camouflage was photographed in China at an unknown location. The photo sparked discussions among military observers, with some saying that China could deploy the tank when there is a need to seize an island.

Wei said that the light-weight Type 15 can be transported to an island via landing ships, as the tank can provide strong fire support and cover for infantries.

After gaining ground on the shore, a tank like Type 15 can work better than an amphibious tank when charging into deeper areas due to its higher mobility, Wei noted.

The anonymous military expert stressed that the tank can be used in a potential landing operation in case force has to be used to keep Chinese territory integrated.

Wei highlighted the fact that the tank is so light, it is possible for transport aircraft to airlift it to the frontline.

Although a traditional airdrop might be difficult, the transport aircraft can fly low and slowly and drop the tank protected by large parachutes, Wei said.

Boasting a similar 105-millimeter main gun, the 30-ton-class VT-5 made by China North Industries Group Corporation is a made-for-export light tank that is also compatible with various types of terrain.
Posted by Coatepeque at 10:44 PM