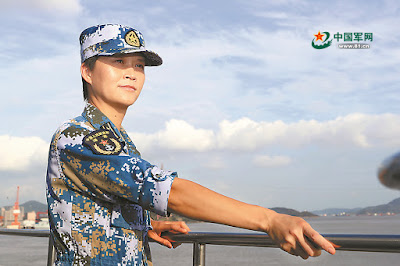 By Fang Sihang and Liu Yaxun

BEIJING, Mar. 8 (ChinaMil) -- In a recent combat drill on the East China Sea, a female officer with military rank of commander adeptly gave battle orders at the operations commanding room aboard the guided-missile destroyer Changchun (Hull 150) of the Chinese Navy.
Who is the female officer? She is Dr. Wei Xiaohui, the first female intern captain of the guided-missile destroyer Zhengzhou (Hull 151) of the Chinese Navy.
The story of Wei’s military career is full of legends: From a well-paid white-collar worker to a naval officer, from an outstanding doctoral student to a commanding officer of a new-type destroyer…
After graduating with a doctoral degree, Wei aspired to join the military and she sent a cover letter to the Chinese Navy, in which she expressed her longing for serving in the military and elaborated her conditions and advantages that would enable her to become a qualified soldier. She also attached awards and certificates she had won and papers she had published, which added up to more than 200 pages in total.
In January 2012, her dream came true as she was enlisted in the Chinese Navy. In the following seven years, she evolved from a new recruit to a deputy department head of China’s first aircraft carrier and then to executive officer and intern captain of destroyers. In the process she achieved an unprecedented growth, faster than standard routines.
In April 2015, Wei was appointed intern executive officer of the guided-missile destroyer Changchun (Hull 150). The first year at the position was full of challenges for her. To learn more about equipment data, she carried a notebook in her pocket so that she could take notes anytime. She took notes on almost everything, ranging from every simple countersign to her own understanding of every operational maneuver, from the name of every piece of equipment to its specific usage methods.
Thanks to her tireless efforts, Wei passed the strict examination and officially became the Chinese Navy’s first female executive officer in March 2016. Then she was appointed the intern captain of the guided-missile destroyer Zhengzhou (Hull 151) in September 2017.
Today, the legendary female officer is just a heartbeat away from the first female warship captain of the Chinese Navy.
Posted by Coatepeque at 7:49 PM