Every formation a parade!

Another glorious day in the PLAN! A day in the PLAN is like a day on the farm. Every meal’s a banquet! Every paycheck a fortune! Every formation a parade! I love the PLAN! 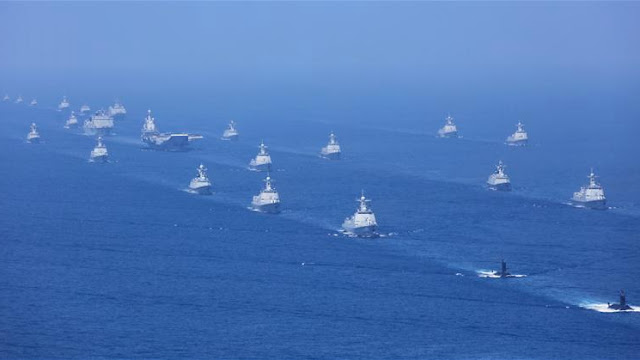 China to hold naval parade on April 23 in Qingdao


-
Vessels and aircraft including the aircraft carrier Liaoning and latest submarines, vessels and fighter jets take part in a review in the South China Sea on April 12, 2018. /Xinhua Photo

China's defense ministry has announced that it will hold an international maritime parade on April 23 in waters off Qingdao city, east China's Shandong Province, to celebrate the 70th anniversary of the founding of the Chinese People's Liberation Army (PLA) Navy.

This information was released by the Chinese Ministry of National Defense at a regular briefing on Thursday in Beijing.

At the event, the ministry's spokesperson Ren Guoqiang also addressed a question by CGTN on the U.S. military's increasing "Freedom of Navigation" operations in the South China Sea.

"Navigation does not equal trespassing and should not violate laws." Ren reiterated.
Chinese aircraft carrier at the navy parade in the South China Sea / CCTV.com Photo

He also warned against stirring up of trouble in the region, saying the Chinese military will take resolute measures to firmly defend its national sovereignty.

On April 12, 2018, Chinese President Xi Jinping, also general secretary of the Communist Party of China Central Committee and chairman of the Central Military Commission, reviewed the PLA Navy in the South China Sea.

Last April, China launched its biggest naval parade in the South China Sea. It featured 48 vessels and 76 fighter jets, including the Liaoning aircraft carrier, J-15 fighter jets and nuclear submarines as well as more than 10,000 personnel.

And in June 2017, China launched a new destroyer, a 10,000-tonne domestically designed and produced vessel. As the first of China's new generation of destroyers, it is equipped with new air defense, anti-ship and anti-submarine weapons. It marked a major step for the country in improving the navy armament system and building a strong and modern maritime force.
Posted by Coatepeque at 1:29 PM

With the money the PRC has spent recently on new ships, this is a great time to be serving in the PLAN. Is the pay any good vs middle income civilian jobs?

Not really. But, there will be people who enlist for other reasons such as sense of duty and opportunity to learn technical trades, not so different from other sailors on other navies