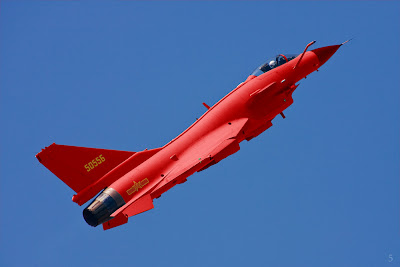 J-10FF, FF stands for FireFighter edition....actually no, it is the PLAAF's "August 1" Aerobatic Flight Team's new bird practicing for the upcoming Oct 1st National Day Parade. Why the bright red color scheme? Well, consider the parade will be directed by Zhang Yimou, it should not be a surprise. Just add a dragon (make sure it is painted yellow) on the fuselage and you are good to go.

BEIJING: Movie director Zhang Yimou will follow up his successful opening ceremony for the Beijing Olympics by orchestrating a celebration to mark the 60th anniversary of communist China, his assistant said Friday.

Directing the Oct. 1 celebration indicates how firmly Zhang, 57, is embraced by the ruling Communist Party after last year's Olympic opening ceremony that stunned television audiences around the world.

For a time, Zhang was considered a troublemaker and had several of his films banned.

Zhang made his career directing films such as "Raise the Red Lantern" and "To Live," unflinching stories about the hardships during China's turbulent 20th century that were not well received by Chinese authorities.

He later directed less gritty works such as "Hero" and "House of Flying Daggers," which made his work available to a wider audience in China and focused more on historical epic.

More than 40,000 people took part in the opening and closing ceremonies of the Olympics, using thousands of costumes and lavish stage sets. Zhang has said the task was much harder than making any film.

Now, Zhang has been given the task of organizing the celebrations marking the founding of the People's Republic of China, said the English-language China Daily newspaper, citing an unnamed senior Beijing municipal government official.

Zhang Jigang, a vice director of the Olympic ceremonies, will team up with the director to put on a "grand show," the report said. While the anniversary is celebrated every year, China normally puts on a bigger show every 10 years.

Zhang Yimou's assistant, Pang Liwei, confirmed that Zhang will be in charge of a gala on the evening of the anniversary but it was not clear what the event would involve.

The official Xinhua News Agency said the tone will be "solemn" rather than extravagant because of the financial crisis.

That means Zhang may have to rely on eye-catchers besides flying acrobats and an extravaganza of fireworks that marked the Olympic gala. The celebration will follow a parade of tanks and missile launchers that will show off the might of the People's Liberation Army.

The military parade will go down Beijing's main boulevard that crosses Tiananmen Square in the heart of the city, from where Mao Zedong proclaimed the establishment of the People's Republic of China on Oct. 1, 1949, after a civil war with the Nationalists, who fled to Taiwan.

Here are some older photos of the "August 1" team and its J-7E. 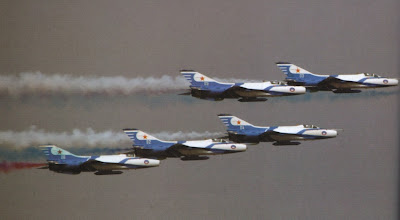 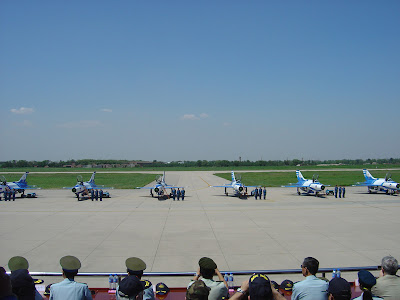