When can I drive it home? 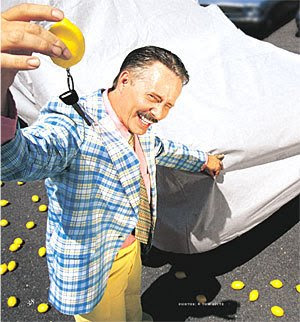 Come, my friend, I have a good AWAC for you. 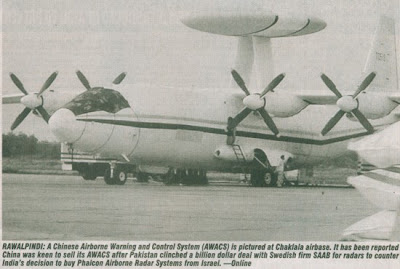 ISLAMABAD (Reuters) - Pakistan is to buy an airborne warning and control system (AWACS) from China to boost its air defences, a Pakistani newspaper reported on Thursday.

The News newspaper said a $278 million agreement had been struck for Pakistan to get the Chinese system within four years, on a deferred payment basis.

Pakistani defence procurement officials were not immediately available for comment.

The report comes as relations between nuclear-armed Pakistan and India have been severely strained by last month's militant attacks in Mumbai, which India has blamed on "elements" within Pakistan.

Pakistan would be the first country to buy the Chinese AWACS system which China only started producing in 2004, the News said.

Pakistan signed a memorandum of understanding with China in November 2006 for long-term collaboration in defence production including development of an airborne early warning surveillance system.

China and Pakistan have been allies for years and China is Pakistan's biggest supplier of defence equipment.

Last month, Pakistan was granted a $7.6 billion loan by the International Monetary Fund to avert a balance of payments crisis and prevent the government defaulting on its international debt obligations.