One Night In Khartoum

PLAAF in Khartoum during the Libya evacuation, must be nice to have local support.

Notice the Chinese style roof in the adjacent apartment buildings. 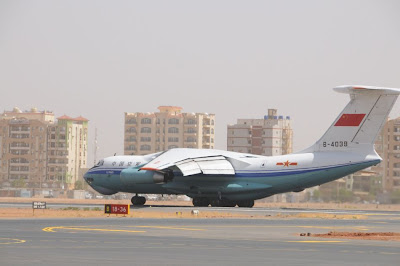 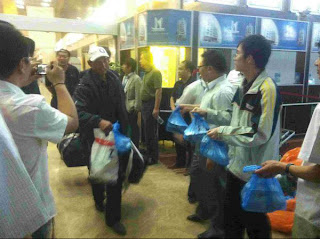 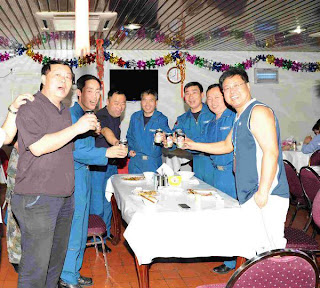 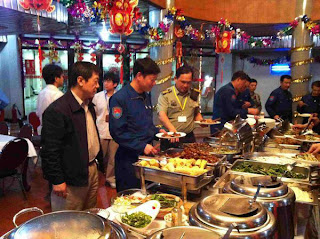 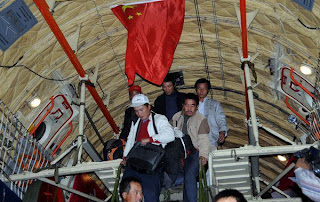 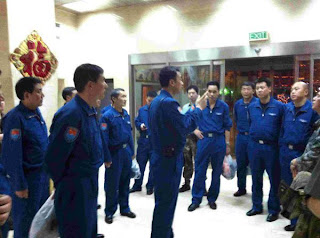 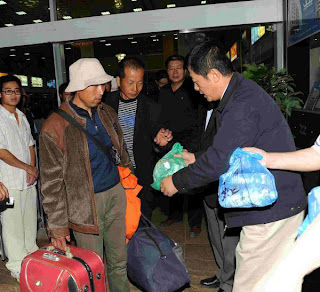 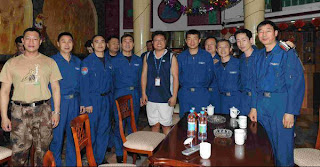 On a more serious note, latest write up from Gabe Collins and Andrew S. Erickson


The People’s Liberation Army Navy (PLAN) made history with the news on February 25 that the frigate Xuzhou, one of the navy’s most modern warships, had been dispatched to waters near Libya to support and protect the evacuation of Chinese citizens. The Libya operation is the Chinese military’s first operational deployment to Africa and the Mediterranean, as well as its largest noncombatant evacuation operation (NEO) to date, with virtually all 35,000 PRC citizens in the country evacuated as of March 3. The bulk of Chinese nationals in Libya were evacuated by sea on chartered merchant vessels (primarily from Benghazi), in addition to chartered aircraft (primarily from Tripoli), military aircraft (Sabha to Khartoum, Sudan), and overland (buses to Tunisia and Egypt). A significant number of individuals are still traveling back to China via international transit hubs, but none are vulnerable to the growing violence in Libya. The deployment of Xuzhou sets a major precedent because it marked the first time China has sent military assets to a distant part of the world to protect its citizens there. This is an historical first for China, and represents Beijing’s growing capability to conduct long-range operations that it was both incapable of doing, and unwilling to do, only a decade ago.

The NEO operation involved an intricate level of interagency coordination, with the Ministries of Commerce, Foreign Affairs, and Public Security working closely with the Civil Aviation Administration of China and consular officials. In addition, Chinese companies operating in Libya, including the China National Petroleum Corporation (CNPC) and China Rail Construction and shippers like COSCO who helped evacuate Chinese citizens from Libya, coordinated closely with the government agencies listed above (Xinhua News Agency, February 24).

Major General Ji Mingkui of the PLA’s National Defense University (NDU) supported the idea that improved coordination and communication within and beyond the services has bolstered China’s ability to perform non-traditional security missions, noting that “in previous evacuation missions, the PLA Navy would not have performed well because tasking areas suffered from siloing” (Sina.com, February 26).

China’s intensive Libya rescue mission also marks the first use of long-range military transport aircraft to rescue Chinese citizens from a foreign conflict zone. On February 28, four IL-76 transport aircraft were dispatched to Libya via Khartoum with Central Military Commission (CMC) approval. As of the evening of March 2, the IL-76s had moved 1,700 Chinese from Libya to Khartoum, Sudan.

During the Libya operation, the four PLAAF IL-76s used Khartoum as a stopover on both the inbound and outbound legs of the trip (Xinhua News Agency, March 4). Khartoum’s use as a waypoint reflects Sudan’s strategic importance to China. Indeed, as Chinese economic and human presence in Africa continues to rise, the fact that military aircraft were allowed to land and refuel there also suggest that the Sudanese government may be comfortable with the idea of fitting into a Chinese “places, not bases” strategy whereby the PRC ensures that it has access to various airfields to support future evacuation operations and other missions in Africa. Furthermore, China Communications Construction Company’s recent announcement that it has entered into a $1.2 billion contract to build a new airport in Khartoum capable of handling aircraft as large as the Airbus A380 will offer incentives and ensure that local infrastructure is up to the task (BBC, February 15).

The deployments send a clear diplomatic message: Beijing is unwilling to tolerate Chinese citizens being harmed by large-scale political violence overseas. They also signal that as the Chinese military becomes more proficient in long-range operations, it will increasingly be able to scale-up deployments if necessary.

China’s strong participation in UN peacekeeping operations in Africa and other areas has created a core group of personnel with operational experience in key parts of the world. China had nearly 1,900 troops detailed to UN peacekeeping missions as of January 31, 2011 [1]. Transport logistics and the political will to send forces overseas have been missing links to date with respect to creating a large expeditionary capability within the PLA, and the Libya deployments mark a first step to addressing both issues. Also, like the ongoing Gulf of Aden counter-piracy task forces, this offers PLAN forces a valuable training opportunity, so that they will be even more experienced and capable in the future.

The Libya mission builds on the PLAN’s Gulf of Aden deployments, and showcases potential military missions “beyond Taiwan” in which the PLA can become involved. China’s decision and ability to send a modern warship and long-range military transport aircraft to a violence-wracked country halfway across the globe will have strategic repercussions that will reverberate for some time, particularly in East and Southeast Asia, the Indian Ocean region, and Africa.

On the other hand, Xuzhou’s mission may actually incentivize Chinese cooperation against non-traditional security threats because, along with the Gulf of Aden counter-piracy mission, it is a concrete demonstration of capabilities that will likely make it harder for China to free ride during future crises that require multilateral responses. Prominent Chinese strategists are supporting a move away from China’s traditional mantra of non-interference in other countries’ internal politics. For example, Zhao Kejin of Tsinghua University argues that China can no longer afford to “use a mechanical interpretation of the non-interference policy” and needs to adopt a more flexible way of thinking that takes each situation and its characteristics into account (Global Times, February 24).

The successful—and unprecedented—PLAN and PLAAF participation in the Libya NEO operation has significant ramifications for defense procurement and security policy discussions within China. These include accelerated procurement of certain key naval assets such as carriers, the wisdom of forward-deployed forces, how to manage the growing Chinese expatriate presence in Africa and other volatile regions where security problems are almost certain to arise, and how to handle popular nationalist pressures for intervening when Chinese citizens abroad are threatened.

Successfully protecting Chinese merchant ships from pirates and evacuating Chinese citizens from violent areas are great cards for PLA senior naval officers and civilian supporters of a strong navy to play during internal procurement debates. Having the PLAN consistently answer the call when China’s overseas comrades and commercial interests need protection clearly explains the force’s value and will smooth the way for advocates of the carrier program, as well as those who seek a more robust long-range naval capability in general.

By highlighting the diplomatic value of a powerful and clearly visible surface ship, the Xuzhou mission may also spark important debates between proponents of the surface warfare and submarine communities within the PLA and civilian leadership. The surface warfare faction can argue that it is the most useful in handling the increasingly frequent non-traditional security missions involving Chinese interests and that naval spending should therefore favor carriers and other visible platforms. In a recent analysis of the Libya evacuation, Global Times reflected pro-surface ship sentiments, stating “China must speed up building its ocean cruising fleet, including aircraft carriers. An ocean cruising navy will enhance China’s ability to execute its global strategy not only as a deterrence against military provocations, but also as overall protection for China’s national interests” (Global Times, February 28). The military will have the funds to further develop expeditionary capabilities, as China plans to increase military spending by 12.7 percent in 2011, to $91.5 billion [2].

Chinese policymakers will also likely place more consideration on maintaining a sustained naval presence in the Indian Ocean region than they did prior to the Libya crisis. The main reason Xuzhou was a useful asset in the Libya contingency was because it was already forward deployed as part of China’s anti-piracy mission in the Gulf of Aden. Senior PLAN and civilian leaders are receiving a firsthand lesson in how useful forward deployed military assets are for a country like China that has increasingly global interests. The anti-piracy missions cracked open the door, but we believe that from this point forward, there is a strong likelihood that the PLAN will seek to assume a more sustained presence in the Indian Ocean region, perhaps extending toward the Persian Gulf as well.

China’s Foreign, Defense, and Commerce Ministries will increasingly have to grapple with a Chinese expatriate presence in volatile areas that is both growing and becoming more diffuse. The basic economics of working overseas are very appealing to many Chinese workers due to the higher pay they receive. In turn, as the number of PRC expatriates working for larger companies like CNPC or China Rail Construction in places like Libya, Angola, Congo, or Sudan increases, business opportunities arise for independent entrepreneurs who follow and establish Chinese restaurants and other amenities for the large company workers. As small merchants, traders, and others join, the large company investments become an anchor for a larger and more diffuse Chinese community in that country.

Beijing will likely struggle to balance the national pride many Chinese feel about the rescue operation with the fact that the precedent set will substantially increase popular pressure for intervention in future crises. The issue is an emotional one for those involved in the rescue and likely their families as well. An article describing the March 1 rendezvous between Venizelos, a cruise ship carrying more than 2,000 Chinese evacuees, and Xuzhou says many on deck burst into tears of joy when they sighted the warship (International Online, March 4). Two bits of anecdotal evidence support the assertion that the government is assiduously managing reporting of the military aspects of the mission. Contacts in China tell us television coverage of the military’s participation in the Libya evacuation mission by Mainland stations has been more subdued than they would have expected. On the Internet, entering the Chinese-character search terms for “Libya Xuzhou Navy” into Google, which does not submit to PRC government censorship, yields roughly 1.2 million search results. Plugging the same terms into Baidu, which complies, yields only 98,800 results, as of March 4.

This dynamic has real strategic implications for two major reasons. First, in the event of major political violence, natural disasters, or other dangerous situations, workers who live in the compounds of major Chinese companies can be located relatively easily and their evacuation arranged accordingly. The predominance of large firm workers and their concentrated locations in Libya facilitated the evacuation process. Independent businessmen and traders, on the other hand, will likely be much harder for the PRC Embassy to locate and communicate with in a time of turmoil. Second, independent entrepreneurs who may have much of their wealth tied up in a shop or place of business are more likely to use violence to defend their assets against looters or marauders. Use of force to defend property, while entirely understandable, would exacerbate street violence and raises the risk that unrest combined with latent anti-Chinese sentiments among the working population in some countries could catalyze more explicitly anti-Chinese violence and put additional pressure on Beijing to intervene.

Posted by Coatepeque at 7:36 PM