Note: It is the Air Force of China, not the PLAAF

A cargo plane of the Air Force of China carrying relief goods lands at a military airport in Bangkok on Saturday, October 22, 2011. [Photo: Xinhua] 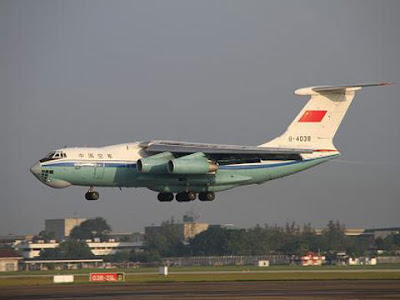 Three cargo planes of the Air Force of China arrived in Bangkok on Saturday morning to deliver the third batch of flood relief goods to Thai government.

China has donated 259 hovercrafts, 150 water pumps, 210 water filters and 1,300 tents among others worth about 40 million Chinese yuan (6.3 million U.S. dollars) as well as 1 million U.S. dollars in cash to Thailand, according to the press release of the Chinese embassy.

At least 356 people were confirmed dead in the worst floods in five decades that have inundated the upper part of the country for almost three months.

Why Air Force of China? This is kind of language reminds me of the translation you get in Chinese supermarkets here in Canada, but you'd think for something like this someone would have hired a PR company first.