A quick net search shows that Sui Jiu 201 is owned by the Guangzhou Salvage Bureau. It must be the oldest ship in the bureau, judging by its appearance and that it was built in 1975. In Japan. 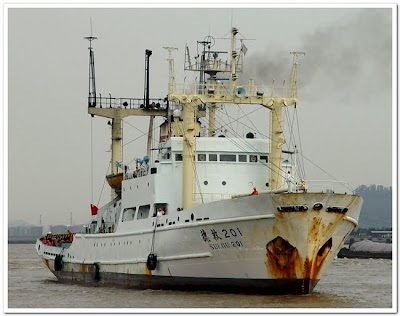 The Ministry of National Defense (MND) yesterday denied local media report that there are loopholes on the national security system after a Chinese vessel that allegedly has close connection with the People's Liberation Army (PLA) Navy was allowed to take shelter in southern harbor of Kaohsiung last week.

According to a Chinese-language Apple Daily report, the Chinese vessel in question was registered as a Panama business ship. The disguise left local Navy unguarded and therefore it was allowed to anchor at the Kaohsiung Harbor from Feb. 2 to 3.

Local military information units were not aware that the boat was connected to the Chinese military until they had intercepted a phone call made by secret agents on board the ship who tried to make reports to the PLA headquarters in Beijing, the report said.

The incident drew criticism from local military experts, who jointly fear that the Chinese ship's attempt to take of refuge could be an espionage act in disguise

They said that the PLA was apparently using the vessel to test the Taiwan military's anti-penetration capability on the country's major harbors and the MND apparently had failed in the test.


In its defense, the MND yesterday accused the report as “ungrounded,” adding that it was fully aware of the vessel's whereabouts and was closely monitoring the ship at all time.

Refuting the rumor that the vessel belongs to the PLA Navy, the MND said the ship, entitled “Sui Jiu No. 201,” is registered under the Chinese government's Maritime Rescue and Salvage Bureau of the Ministry of Communications.

Its crew had filed an application to the Kaohsiung Harbor Bureau on Feb. 2 to take shelter because of “extreme poor weather,” the MND said in a released statement.

The Kaohsiung Harbor Bureau granted the application based on related regulations. The ship was later permitted to anchor at a designated area “outside” the harbor.

During the period of its stay, related government units including the Navy and the Coast Guard Agency were both closely monitoring the vessel and its crew.

The ship left the harbor around 8 a.m. Feb. 3, the MND statement said.

The MND stressed that it has always been paying close attention to all foreign ships that are sailing near the seas around Taiwan for the sake of national security.

Posted by Coatepeque at 9:21 AM

what is that has anything to do with the Sui Jiu Nu 201?