In some corners outside of Asia, China’s action to patrol one of the main rivers of the world is somehow twisted as an exercise in hegemony. For those Asians who face lawlessness on a daily basis, they have a different perspective on this matter. 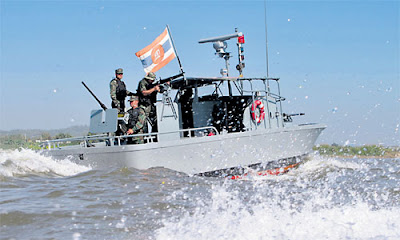 Navy to step up patrols after Chinese slayings

CHIANG RAI : The navy will reinforce its patrols along the Mekong River to help the four-nation effort in policing this transnational river, following the slaying of 13 Chinese sailors last year.

A patrol boat sails along the Mekong River in Chiang Rai in a bid to stamp out illegal activities on the waterway. WASSANA NANUAM

"I'm considering increasing boat and troop numbers because we have many tasks to do," navy chief Surasak Roonroengrom said.

His plan to strengthen the navy's Me Khong Riverine Operation Unit is necessary because its task in Chiang Rai is hindered by a limited number of military personnel and supplies.

The operation unit employs only 11 boats in total _ three patrol vessels and eight assault vessels _ to serve only about 200 soldiers.

"But there have been more seizures of illegal items, crashes and losses" during operations in the Mekong River, he said.

The latest loss, which has alerted Thailand, China, Laos and Myanmar to violent crimes on the river, is the mysterious killing of 13 crew members on two Chinese-flagged cargo boats, the Yi Xing 8 Hao and Hua Ping, on Oct 5 last year in Chiang Rai's Chiang Saen district.

Nine Thai soldiers of the Pa Muang Task Force, who reportedly seized 920,000 speed pills from the two barges, have been implicated in the murders. Inquiries are continuing.

They blamed a Shan drug trafficking gang, led by Nor Kham, for hijacking the boats and using them for smuggling the drugs into Thailand.

The group is believed to have 20 to 100 armed members and has been active along a 150km stretch of the river, Sorracha Sornprathum, chief of the Me Khong Riverine Operation Unit said.

Following the murders, the four countries joined forces to set up a patrol unit, made up of three Chinese boats and one boat each from Laos, Myanmar and the Thai Marine Police Division, to tighten security along the Mekong.

The multi-nation unit is responsible for areas from Sipsongpanna in China's southern Yunnan province, to the Golden Triangle where the borders of Thailand, Myanmar and Laos meet.

The navy's Me Khong Riverine Operation Unit will back up the joint patrol by watching out for illegal activities on the river within Thai territory.

Smuggling of drugs, Siamese rosewood and contraband along the Mekong and the Thai-Lao borders is increasing, said R Adm Sorracha, whose unit oversees the 917km section of the river that passes Chiang Rai, Nong Khai, Nakhon Phanom and Ubon Ratchathani.