ROC kudos of the day:500 veterans hold parade to show how it's done 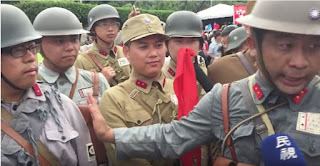 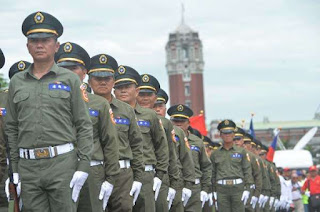 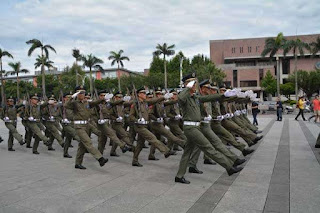 
http://www.chinapost.com.tw/taiwan/national/national-news/2016/06/13/469151/500-veterans.htm
TAIPEI, Taiwan -- Around 500 retired military personnel held a parade in front of the Presidential Office on Sunday as part of a campaign launched after a video clip was released showing a poorly executed parade by incumbent military police trainees.

Featuring 500 retired military personnel over the age of 50, mostly veterans of the R.O.C. Army, the parade was held at Ketagalan Boulevard around 9 a.m.

Goose-stepping in parade formation, the veterans sang military songs and the R.O.C. national anthem, in a move organizers said was intended to "rekindle patriotism and call on citizens to support national defense," in front of thousands of spectators.

Henry Ho (何啟聖), initiator and spokesperson of the campaign, told reporters that the parade was held in an attempt "to send positive energy to Taiwan society."

The campaign was initially launched after many veterans saw a video clip of a poorly executed parade by Military Police trainees this February.

In the clip, most trainees were unable to synchronize their movements as per training expectations.

Following the release of the video, many have criticized the R.O.C. Military Police for a lack of discipline and proper training. The Military Police are considered to be one of the most elite groups within the nation's Armed Forces.

The Military Police Command decided to replace the head of its training center, after the Jan. 4 video taken at a training center in New Taipei's Wugu District was released.

The Ministry of National Defense (MND) explained that that the poor performance visible on the video clip has "damaged the image of the nation's Armed Forces."

Angered by the poor performance of these trainees, Ho decided to form a Facebook page calling for veterans to participate in a parade of their own to show Military Police trainees what a parade "is supposed to" look like.

According to Ho, thousands of veterans expressed interest in participating in the parade less than a week after he created the page.

Chou Chih Hsiang (周志祥), who was in charge of training veterans for the Sunday parade, said he was proud of the retired soldiers, since it only took them several weeks of training to prepare for the event.

The organizers said veterans came together from across the country and were trained for seven weeks.

Many of these retired soldiers participated in military parades in front of the Presidential Office during the 1980s to 1990s.

Both Ho and Chou, however, refused to comment on the recent incident when a pro-Taiwan independence individual verbally abused veterans by calling them "Chinese refugees" and demanding they go back to China.


Meanwhile, in a statement, the MND praised the civilian-initiated parade, saying that the veterans made a move to safeguard the dignity and honor of the R.O.C Armed Forces, and that their efforts can serve as an example for incumbent military personnel.

Posted by Coatepeque at 2:33 PM