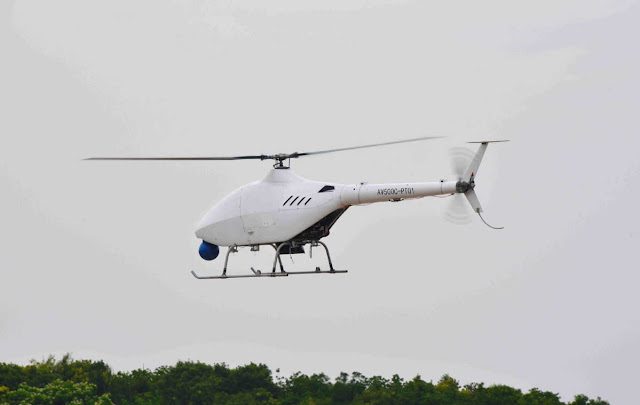 The AR500C, designed and built by the AVIC Helicopter Research and Development Institute in Jingdezhen, Jiangxi province, took off for the first time on May 20 at the institute's unmanned aircraft testing base in Jiangxi's Poyang county and stayed in the air for about 20 minutes.
It made several maneuvers during the flight and produced "satisfactory data", AVIC said in a statement.

The company said the model was designed based on its predecessor, the AR500B, and in accordance with plateau environments. It has been tasked with undertaking information support operations such as reconnaissance and signal relay, it added.

Fang Yonghong, technology director at the institute, said the AR500C has a maximum takeoff weight of 500 kilograms, a flight ceiling of 6,700 meters and a maximum speed of 170 kilometers per hour. It can stay in the air for five hours during an operation and can make autonomous takeoffs and landings.
The unmanned rotorcraft can carry additional equipment to carry out various tasks such as electronic jamming, aerial search, fire suppression, maritime surveillance as well as tracing for nuclear or chemical leaks. It can also cooperate with manned aircraft or independently operate in target locking and strike, and supply transportation, he said.

The institute started research and development on the AR500C last year with designers focusing on its engine, rotor wing, aerodynamic modifications and composite materials. The first one was assembled in March and then began to undergo ground tests before the flight test, according to Fang.
AVIC developed several types of unmanned helicopters, but they were not specifically designed for plateau deployment.

Compared with conventional unmanned helicopters, those made for plateau operations should have stronger engines, better temperature adaptability and other specific modifications, he said, adding that they will be very useful in China.
Posted by Coatepeque at 1:26 PM