Seeing the Philippines Air Force training with the PLAAF puts some perspective into Sino-ASEAN relations.

Starting from September of 2011 through January of 2012, the Air Force Command College (AFCC) of the Chinese People’s Liberation Army (PLA) is scheduled to organize Chinese and foreign pilots to conduct simulated tactical drill and training in an effort to improve their organizing ability in transnational joint operation.

The first simulated confrontation drill was unveiled in the International Training Department of the AFCC on September 24. During the drill, 4 pilots from the aviation troops of the PLA Air Force and the other 4 pilots respectively from Venezuela and the Philippines were divided into two teams and conducted simulated coordination on fighter formation and mid- and close-distance confrontation.

It is learned that the foreign pilots will observe and study the air-drop and airport-seizing operations of the PLA airborne troops, the three-dimensional break-in and in-depth attack operations of the armored brigade, and the live-shell drill of an armored infantry battalion's joining into operation from marching under support of air and ground fire. They will also visit the static equipment exhibitions and flight training of the aviation troops in Shanghai, Shenzhen and Xi'an.

Currently, the AFCC of the PLA becomes the first choice of advanced study abroad for the air force officers of 75 foreign countries including Pakistan, Singapore and United Arab Emirates. Some of these countries have even listed the training experience at this college as one of the prerequisites for their officers’ promotion.

Unrelated photo of the PLAAF Su-27 drill in Turkey.
(thanks foxmulder_ms for the photo) 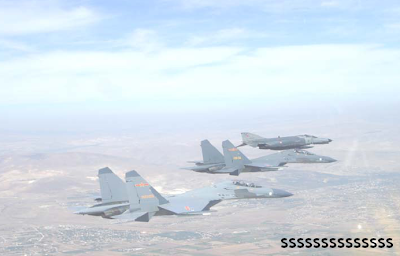 Posted by Coatepeque at 7:35 AM