An interesting Interview by the US Army Times.  African nations need to protect themselves and not many of them can afford a 45 million USD late model F-16, that is where China comes in.

Chinese sales of military equipment to African nations can be “helpful” and do not represent “military competition” with the United States, the head of U.S. Africa Command told reporters Wednesday.

China has aggressively marketed its weapons to African governments during the past decade, often in exchange for access to the continent’s vast mineral deposits.

Yet Army Gen. Carter Ham, who took command of AFRICOM on March 9, did not appear unduly troubled by Beijing’s maneuvering.

“It’s very clear that the Chinese, like us and like many others, are engaged in supporting African militaries with equipment,” Ham told defense reporters over breakfast in Washington. “As the commander of U.S. AFRICOM, I don’t see that as a military competition, if you will, between us and China.”
Related reading

Ham cited Beijing’s recent delivery of riverine craft to the Democratic Republic of Congo’s security forces as an example. “I actually think that’s pretty helpful,” he said. “That’s a capability that they need, it’s not a capability that we possess and so it actually can be pretty helpful. There are a number of African nations who fly Chinese aircraft, have Chinese maritime patrol vessels and the like and I don’t see that, again, as a military competition, but rather African nations making decisions about where can they best find a supply of the materiel and equipment that they need to accomplish their objectives.”

“Would I prefer them to have all U.S. stuff? Absolutely. That makes it easier for us to engage … but the Africans will make decisions that are best for them.”

The general said it was “uncertain” whether China had provided arms to Moammar Gadhafi’s regime in Libya, and added that — “off the top of my head” — he did not know about any Chinese delivery of man-portable air defense missiles to African countries.

However, such missiles rank first among what Ham said were three categories of weapons he was concerned might find their way from the Gaddaffi regime’s arsenal into extremist organizations’ hands in the wake of the Libyan uprising.

Second in Ham’s list are conventional munitions and explosives that militants might use as components of improvised explosive devices. The third category includes “the residual components” of Gadhafi’s chemical weapons program that were the focus of a demilitarization effort that interrupted by the uprising, Ham said. Although such elements are difficult to turn into weapons, there is nevertheless “a great concern about the security of that material,” he said. 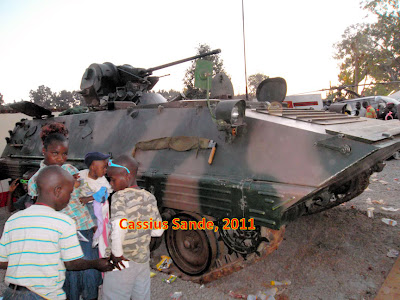 As long as the US is still there providing training and leadership, I don't think anyone cares where they are getting the equipment and small arms from