Be advised not to generalize too much out of this news -- AWOL incidents happen to any military, not just the Chinese with over two millions members.

Here is the wanted posters for those four escapees available in Chinese forums. 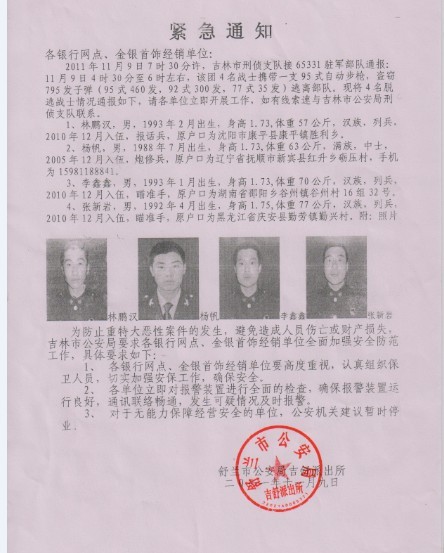 Chinese special forces have shot dead three teenage soldiers after they escaped from an army base and travelled up to 650 kilometres, taking with them an automatic rifle and 800 rounds of ammunition.

A fourth soldier who escaped with them was arrested, according to officials.

The four men escaped between 4 and 6 a.m. on Tuesday from a base in Shulan, 80 km from the northern city of Jilin.

Lin Penghan, Li Xinxin and Zhang Xinyan were all 18 and had joined the army last December, two of them working as artillery gunners and the third in signals and communications.

The survivor, Yang Fan, 23, a sergeant, was an engineer who joined the People's Liberation Army in 2005.

As they slipped out of the base, they carried a Type 95 automatic rifle and nearly 800 rounds of ammunition.

They took a taxi south toward the city of Shenyang, the capital of the neighbouring province.

It remained unclear on Wednesday why the men had fled, but police in Jilin issued a notice to all the banks and jewelry stores in the area to be on the alert.

The four drove for at least eight hours before they were stopped by special forces on the highway.

An unnamed witness posted a photograph of their final stand on the Internet, showing a green and yellow taxi cab with its windows smashed and bodies lying in the yellow scrub by the side of the road.

He said there had been a firefight, in which at least one police officer was shot.

In September, a former soldier escaped from a maximum-security jail in Hebei province. Wang Zhenqing, 43, spent two weeks on the run before being caught in Henan, the neighbouring province.
© Copyright (c) The Province

Hi my name is yogesh kumar. I like this blog website. I say thanks to that person who made this
www.yogesh-kumar.com

This was spinned as a humanrights violation by the Guardian and AFP.

turns out these guys were heading to the hometown of 1 of the 4 whose family's land had been stolen by the local government to sell to developers. this happens a lot in china, and occasionally one of the victims is someone with access to an automatic rifle. the PAP knew what was up, as the shootout was at the offramp to the dude's hometown from the main highway. there was never a danger to banks or jewelery shops, that's just to keep the heat of the local officials.