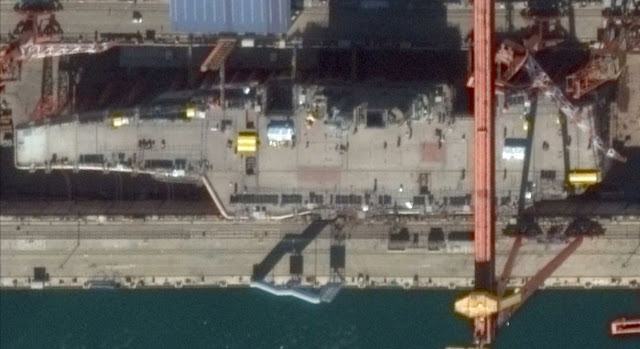 China is close to completing its second aircraft carrier, which will begin service by 2020, experts said.

China Central Television (CCTV) reported that the People's Liberation Army (PLA) Navy's Type 001A class aircraft carrier's scaffold has been removed and red undercoat has been painted below the ship's waterline in Dalian, northeastern Liaoning Province, and that a launching ceremony will soon be held.

"Unlike the Liaoning(Type 001), China's first aircraft carrier, a refitted ship built by Ukraine (under the former Soviet Union), the 001A is China-built, and its design, combat capability and technologies will be much more advanced," Song Zhongping, a military expert, told the Global Times.
"One key difference is the design will be more 'humanized,' which means all personnel on the carrier will enjoy a more comfortable and modern environment," Song said.

However, "there's still a long way to go from its launch to enlistment, which normally takes two years," Yin Zhuo, a senior researcher at the PLA Navy Equipment Research Center, told CCTV.
Song said "its status can be compared to a house whose paint job has been completed but requires decorating, which, in military terms, is called the 'outfitting stage.'"

It means all weapons and equipment, including the radar system, air defense system and communications system will be outfitted on the carrier. After this, the carrier and aircraft on it will be tested, and then the carrier will be ready to serve, Song said.

"Construction of the aircraft carrier is on schedule. Most of its construction and design work has been completed. Its hull has already been assembled at the shipyard. The ship will soon be equipped with radar and other facilities," said Chinese defense ministry spokesperson Wu Qian in October 2016, in response to media inquiries on reported aircraft carrier images circulating online.

A large amount of work remains to be done on the carrier's outfitting stage after it's launched, presumably sometime this year, Li Jie, a naval military expert, said. "It will take about one to two years to carry out functional debugging of its devices, weapons and equipment. The new aircraft carrier can begin sea trials by early 2019."

On December 31, 2015 the Chinese defense ministry formally announced the construction of the 001A, and another spokesperson Yang Yujun said, "This carrier, with a displacement of 50,000 tons, will be the base for J-15 fighters and other types of aircraft."

The design and construction of the second aircraft carrier is based on experience, research and training from the first carrier, the Liaoning, Yang added.

Based on information released by the Chinese defense ministry, 001A's aircraft will still use the ski-jump method of taking off from a ski ramp on the front of the carrier just like its "sister," the Liaoning, rather than more advanced catapult technology used by US aircraft carriers.

China is looking into catapult technology, Li said, and the technology will likely be adopted on the 002, China's third aircraft carrier, which is being built in Shanghai.

"In other words, 002 is entirely different from the Liaoning (001) and 001A, and it will look like US aircraft carrier rather than a Russian one," Li said.

Most advanced aircraft carriers use the Electromagnetic Catapult System, or Electromagnetic launcher (EML), to launch carrier-based jets, but China is still testing steam catapults, Li said. "The main difference is that EMLs are more flexible and the system's speed can be controlled, so it can launch aircraft of different sizes."

Yin said "in order to protect China's territories and overseas interests, China needs two carrier strike groups in the West Pacific Ocean and two in the Indian Ocean. So we need at least five to six aircraft carriers." 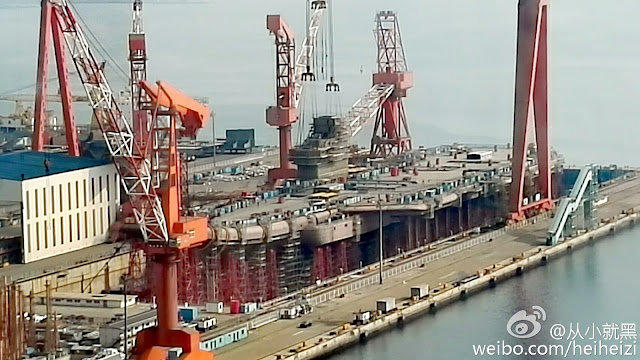