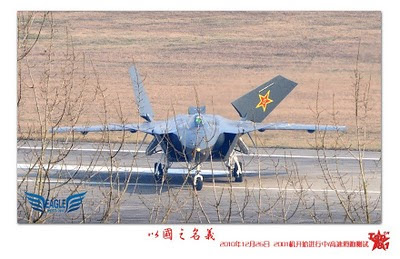 Much to the chagrin of Lockheed-Martin's JSF team, it appears there really is a new Chinese stealth fighter. And by the looks of it, the Chinese J-20 is a heavyweight contender built to challenge the F-22 Raptor. For the first time since the end of the Cold War, US air dominance seems in question. But where does this leave the F-35 JSF?

JSF is the "one-size-fits-all fighter", good for the US Air Force, Navy, and Marine Corps, as well as all interested foreign customers. In an attempt to meet all roles and needs, within an affordable budget, the JSF has necessarily compromised capability in some areas, particularly air-to-air combat. The US Congress and International Customers were told the JSF possessed sufficient air-to-air capability, with Lockheed-Martin claiming a "close and long-range air-to-air capability second only to that of the F-22 Raptor." However, with the sound of the twin-engined Chinese J-20 roaring down the flightline at Chengdu, it appears Lockheed-Martin's claim may have been a bit short-lived.

Many international customers currently invested in the JSF would have preferred purchase of the air-to-air optimized F-22 Raptor, but the US has banned Raptor exports. International buyers were told JSF was the best air-to-air fighter their money could buy. Now facing a likely overmatch against the Chinese J-20, JSF shareholders such as Australia and potential Asian buyers such as Singapore, Japan, South Korea, and of course Taiwan must now be quite soured on the US refusal to sell the F-22.

It seems certain the emergence of the J-20 into the Asian military equation will precipitate a cascade of new fighter procurement in the region. Beyond Australia which has already financially committed to the JSF, the F-35 will most likely not be among the new types sought.
Posted by SteveM at 11:15 AM

Now i dont really know whats going on in there but this sure is one hell of a plane. Its first looks tell that china means some serious business here, it is by far much more stealthy than the russian PAKFA. also seems very similar to the F35 except the canards. the only thing that remains to be seen is the extent of sensor fusion and avionics on it. where F35 lacks is made up by its top notch sensor fusion and avionics. This question will ultimately define J-20s real potency as producing a 5th gen airframe is not the real or only thing here. We hope and expect (would like to be sure too) that J20 will incorporate some of the best 5th gen features of sensor fusion, high maneuverability, super cruise and considerable stealth towards the rear too. hopefully some chinese engines will power it ultimately. everythings great but chinese engine progress is one very unconfident factor. good luck and this is way too fast a surprise.

This thing is a beast! Its the size of an F-111! Why so big I wonder?
Sensor size? Fuel load? Is it really a Fighter/Bomber?
Just wondering.

Officially, the Australian government hasn't handed over the money for the first batch of 14 Joint Strike Failures. Now with even more signs of the F-35 being obsolete, and more signs of it being unaffordable and late yet again, maybe it will get a little interesting.

Just a thought. Maybe Australia is purchasing these with an American backed offer to pay for them - in exchange for access to a model for reverse-engineering. We are allies after all.

How does this question US Air dominance? I am not a US fanboy, but that simply does not go online with reality. We have zero proof this is anything but a very early prototype, and further lack any evidence even the finished product down the line will be an F-35 level product. We do have proof that the US is considerably ahead in almost every aspect of military aviation technology. WHen we look at numbers of F-35s ordered, added to the considerable number of operation F-22s, I don't think this..weird..stealth prototype changes anything. Aside from gives LM more power to claim the F-35 is critically needed.

Berating the Chinese- Oh that White man is funny. China on notedly 2 occasions pooped submarines during US Naval exercise stealthily in the mids of entire fleet without the need for out-lookers to fit binoculars - it was up in their face kind a show from the Chinese Subs. Wall Street and US government gun boat may corner the markets but not knowledge and technology.

More details about the J 20 here