A note to Comrade Kim?

While China calls for calm in the Korean Peninsula by calling for the cessation of military drills, it is interesting to see China stage a large drill of its own by one of its two Praetorian Guards: the 38th and 39th Group Armies. It might be a coincident that this drill is scheduled near Secretary Gates and the Defense minister of South Korea, Kim Kwan-Jin's, planned visit to Beijing (here). Nevertheless, over the recent years, both Praetorian Guards have undergone intense modernization, including the introduction of top-of-the-line systems such as the Type 99 MBT, the WZ-9 attack helicopter, and the PLZ-04 155mm Self-Propelled Howitzer. Shengyang air force’s 1st Air Division became the first operator of the J-11B fighter. In sum, the Praetorian Guards are the most powerful armies of the PLA and they are not even facing “an island”.

One can speculate what the Praetorian Guards' mission might be: containing 23 million refugees? Protecting a weak regime from imploding? Or to simply stand tall as a reminder that China does have a military option if Dear Leader (tm) crosses the line. It seems that the PLA has a contingency plan.

Administration officials said the Chinese government had embraced an American plan to press the North to reconcile with the South after its deadly attacks on a South Korean island and a warship. The United States believes the Chinese also worked successfully to curb North Korea’s belligerent behavior.

Shown in the picture is the site of the winter tactical drill with real troops of a division under the PLA Shengyang MAC. (Photo by Li Guangdong)

When it cleared up after the heavy snow, a division under the Shenyang Military Area Command (MAC) of the Chinese People’s Liberation Army (PLA) allied with an aviation division under the PLA Air Force to conduct a tactical drill with real troops in the Keerqin Grassland of North China’s Inner Mongolia Autonomous Region. 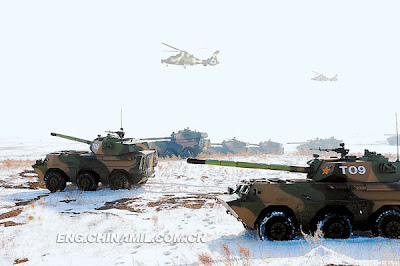 Good post. Also interesting that China holds what is ultimately a trump card in political change in North Korea - namely, eldest son Kim Jong-Nam, who lives in Macau at the pleasure of the Chinese authorities.