USS Washington on the front page of the PLA Daily (English edition).

Again, it is fashionable for some pundits to proclaim the deployment of the USS Washington as an attempt to embarrass China's North Korea policy. There are three issues with this proclamation. First, there is no such thing as "embarrassment" in international relations. One thing the recent wikileaks has demonstrated is that what diplomats discuss behind closed doors is clearly not the same thing that shows up in polished (scrubbed) public press releases. Second, how does Obama seeking help from Hu in defusing the tension, and Adm Mullen calling for China to take the lead translate into the US "wanting to embarrass China?"(here) Third, most observers fail to realize or read Chinese opinion. The shelling of Yeonpyeong is different from the Cheonan incident because the latter happened in disputed territory. We all know how sensitive Beijing gets when the words "deploy aircraft carrier," "Asia water," and "disputed territory" line up.

This is by no means a defense of North Korea's action regarding the Cheonan incident. It was a naked aggression and that is indisputable. However, when it comes to analyzing China's foreign policy, one must observe calmly, secure a position, and cope with affairs calmly. Jumping to conclusions without all the facts is not an indicator of good journalism.


A jet fighter is about to take off from the aircraft carrier USS George Washington during a joint military exercise conducted by South Korea and the United States in tense waters west of the divided Korean Peninsula on Nov. 30, 2010. (Xinhua/Pool) 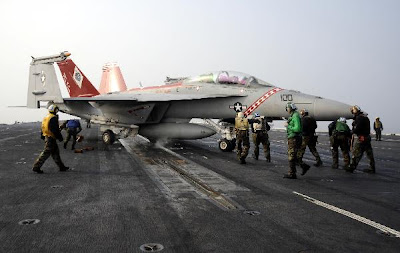 Posted by Coatepeque at 3:30 PM