According to both Chinese Media and Japan's Joint Staff Press Release PDF (here), a CVBG is on route to  the Pacific ocean for drills.   Leading the CVBG is the Liaoning (CV16) together with two 052D DDG and two 054A FFG and one tanker 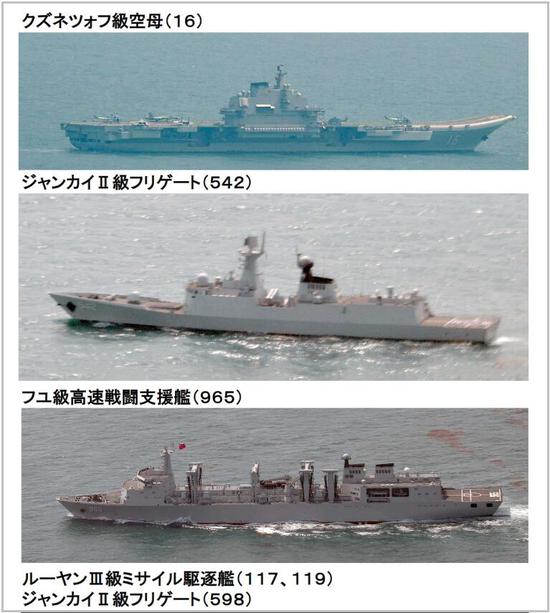 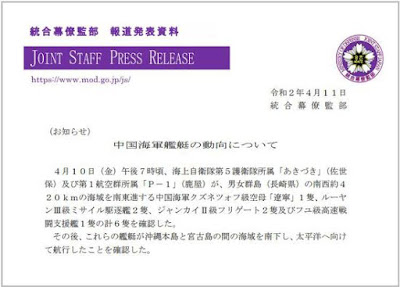 TAIPEI (Reuters) - A U.S. Navy guided-missile destroyer sailed through the sensitive Taiwan Strait on Friday, the U.S. and Taiwan militaries said, the same day that Chinese fighter jets drilled in waters close to the democratically-ruled island.

China, which considers Taiwan its own, has been angered by the Trump administration's stepped-up support for the island, such as more arms sales, U.S. patrols near it and a visit to Washington by Vice President-elect William Lai in February.

Taiwan and China are also embroiled in a bitter spat about the former's lack of membership of the World Health Organization during the coronavirus outbreak, because of objections by Beijing, which views it as merely a Chinese province.

The U.S. Pacific Fleet named the ship that sailed through the Taiwan Strait as the Arleigh Burke-class USS Barry.

"Barry is forward-deployed to the U.S. 7th Fleet area of operations in support of security and stability in the Indo-Pacific region," it said in a brief statement on its Facebook page on Saturday.

Taiwan's defense ministry said its armed forces monitored the ship as it sailed south through the waterway. It described the U.S. ship as being on an "ordinary mission".

Taiwan has repeatedly complained of China continuing to apply military pressure during the virus crisis.

Taiwan is China's most sensitive territorial and diplomatic issue and Beijing has never ruled out the use of force to bring the island under its control. The narrow Taiwan Strait that separates the island from China is a frequent source of tension.

The U.S. navy has been stepping up patrols through the Strait, with its last less than a month ago, prompting China to say the United States was playing a dangerous game with its support for Taiwan.

The United States, like most countries, has no official relations with Taiwan, but is the island's most important international supporter and main source of arms.

In January another U.S. warship sailed through the Strait less than a week after President Tsai Ing-wen won a landslide re-election on a platform of standing up to China.


(Reporting by Ben Blanchard; Editing by Clarence Fernandez)
Posted by Coatepeque at 4:35 PM