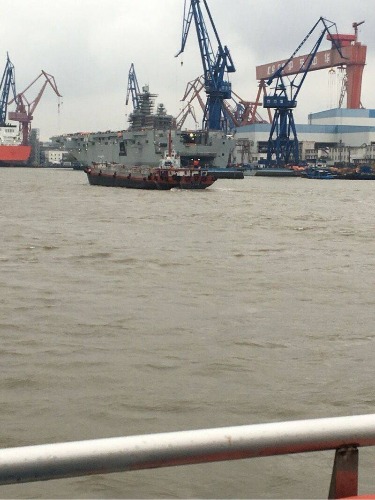 This incident is confirmed by Chinese media the Global Times:

China's first Type 075 amphibious assault ship reportedly caught on fire on Saturday at the Hudong Zhonghua Shipyard in Shanghai. Although thick smoke was seen on the ship, sources in the know said the accident was not significant and will not wield any major impact on further construction.

Photos circulating on the internet showed that the stern of a Type 075 amphibious assault ship was blackened by a fire, and certain videos showed that there was fire at the stern, and columns of smoke were billowing with the wind, Singaporean news outlet Lianhe Zaobao reported on Saturday.

Sources said the ship that caught fire was the first Type 075 of the People's Liberation Army (PLA) Navy, and the warship was still under construction.

The ship received a grand launch ceremony on September 25, 2019. As China's first ever domestically developed amphibious assault ship, the Type 075 has strong capabilities in amphibious warfare and could conduct multiple types of missions. According to plan, the ship would conduct equipment calibration, mooring and sea trials.

In line with general rules, related testing processes after the ship's launch are still under the management of the shipyard rather than the navy.

Beijing-based naval expert Li Jie told the Global Times on Saturday that smoke concentrated on the middle and rear areas of the ship, judging from the photos, and the cause for the fire is likely be problems with the power and mechanical systems, sparks caused by electric welding in maintenance, a fire in the kitchen or some flammable materials on deck or in the hanger that were left unsupervised for some time.

Judging from the thickness of the smoke, the fire was put under control quickly, and since no open flames were seen, the fire should have been extinguished very quickly, Li said.

Echoing Li, an expert in the shipbuilding industry who asked not to be named told the Global Times on Saturday that the thick smoke indicated the emergency response was fast.

Since the construction of the ship was still underway, there could be materials being placed on the ground, which could have been ignited by sparks caused by electric welding, the anonymous expert said.

Sources in the know said that although the smoke seemed to be thick, the fire was not even considered a small accident, and will have no major impact on further construction.

Any missed details could result in an accident in the construction of a large ship, and a small problem could potentially impact the overall construction, Li said, noting that despite this, no country could possibly avoid all accidents, so there is no need to groundlessly speculate on the origins of the Type 075's fire.

Accidents taking place in the process of construction can help find out any causes and solve hidden problems in advance, before a larger accident occurs, Li said, noting that, as the amphibious assault ship will be frequently used in the future, if any major technical issues were to be found later on when the ship was being used by the military, the result may potentially be worse.
Posted by Coatepeque at 4:18 PM