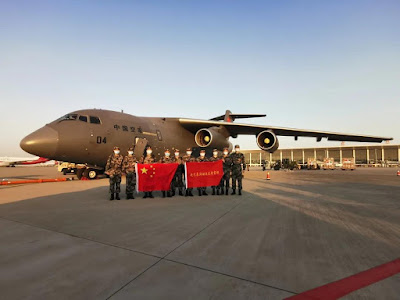 Photo:Courtesy of the Ministry of National Defense

China sent military medical teams to Pakistan, Myanmar and Laos to fight COVID-19 on Friday. Analysts say this shows the high-level of mutual trust and friendly relations between China and these countries, and that the People's Liberation Army (PLA) medical teams are the most experienced force in China in handling public health crises.


The Ministry of National Defense of China released a statement on Friday that the Central Military Commission approved the Chinese Air Force to dispatch aircraft to deliver emergency medical supplies and professional medical teams to the three countries for anti-pandemic efforts.

A medical team from the PLA arrived in Yangon, Myanmar on Friday morning, bringing medical supplies including test kits and KN95 medical masks to help local military forces.
Photo:Courtesy of the Ministry of National Defense

According to China Central Television, the Chinese military medical team consists of six experts, who arrived at the Yangon International Airport by a Y-9 military transport aircraft together with the supplies.

This is not the first time that China has helped the three countries fight the virus. According to the Xinhua News Agency, a team of Chinese medical experts who were aiding Myanmar in its fight against COVID-19 returned on Wednesday to Kunming, capital of Southwest China's Yunnan Province.

The team, consisting of 12 medical experts from Yunnan, was established by the National Health Commission. They arrived in Yangon on April 8, with a batch of donated medical supplies.

An eight-member medical expert team organized by the Chinese government also arrived in Islamabad, Pakistan on March 28 to help the country fight the pandemic.

A team of Chinese medical experts, along with medical supplies, arrived in the Lao capital Vientiane by charter plane on the morning of March 29.

When China was fighting a tough fight against COVID-19 during the early stages of the pandemic, the three countries provided various forms of aid to China.

The Xinhua News Agency reported on March 1 that the government of Myanmar had donated 200 tons of rice to China as part of humanitarian aid.

On February 1, Pakistan was one of the first countries to airlift medical masks from its public hospitals to China, even though it faced a shortage of masks.

The PLA medical teams are much more experienced than most medical teams in China, since they accomplished a series of tough missions in the past, including the fight against SARS in 2003, providing medical aid after the Wenchuan Earthquake in 2008 and the battle in Africa against the Ebola virus, as well as many UN peacekeeping missions, said Song Zhongping, a military expert and TV commentator.

According to the World Health Organization on Friday, Pakistan now has 10,815 confirmed cases, Myanmar has 127 and Laos has 19. 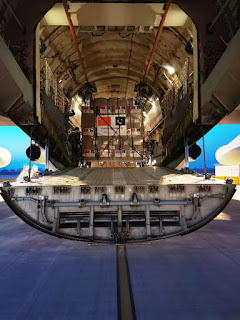 Posted by Coatepeque at 5:34 PM