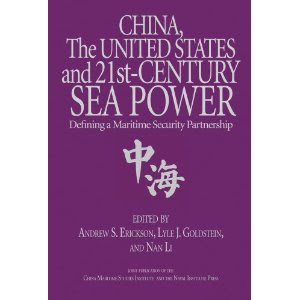 In the fourth volume of the series "Studies in Chinese Maritime Development" authors from the US Naval War College and their Chinese counterparts (including Rear Admiral Yang Yi, former director of the Institute for Strategic Studies of the National Defense University of the Chinese People’s Liberation Army) map out a possible path for a maritime security partnership.

The goal of this book was not to provide "in-depth analyses" as was the seen in the previous three volumes (China's Future Nuclear Submarine Force, China's Energy Strategy, and China Goes to Sea: Maritime Transformation in Comparative Historical Perspectives) but rather to focus on the requirements to establish political and institutional frameworks in hopes of creating a stable, mutual and beneficial relationship for both sides.

The authors from both sides are professionals -- given today's political reality between the two nations, especially the predominant concern in the Taiwan Strait, they focus on MOOTW and non-traditional security threats and opportunities. These threats range from anti-terrorism, civil maritime enforcement, humanitarian operations, submarine rescue, to the prospects for Sino-US naval cooperation against avian influenza. For example, the Sino-US Coast Guard (USGC) cooperation has been successful – the USCG/CFLEC (China Fisheries Law Enforcement Command) team was credited with reducing illegal driftnet fishing by Chinese flagged vessels in the North Pacific Ocean. In April 2008 an unidentified cargo ship collided with the Chinese F/V Hu Hai Yu 5662, killing two fishermen. With the help of the LAPD, the unidentified cargo ship was discovered in the Port of Los Angeles. Lastly, the USCG marine inspection officers were granted multiple entry visas, a rarity among non-diplomatic US government officials.

Of course, it is unrealistic to expect civilian cooperation to translate into the military space as long as the Chinese sticky point of "sovereignty" is in question (or the perception of). A great length of the book is devoted to sharing common interests, and addressing common uncertainties and mistrusts between both sides. The PLAN’s deployment to the Gulf of Aden is frequently cited as an example of military-military cooperation, but it should not be the only one. Other events such as PME exchange and submarine rescue (China is already getting support from England) should also be included in building up the political and institutional framework. The Chinese contributors to this volume also expressed interest in the U.S Navy’s Global Maritime Partnerships (GMP), which is a good start.

Unfortunate incidents will occur again, and angry OpEds that paint using black-and-white will inevitably fill our screens, but one could hope that with time and further understanding, such unfortunate events will be managed with greater ease. The attempt by the good folks at the US Naval War College should be applauded – the impact of this important work will move from academia to shape the policy between two great nations and half the world. As David N. Griffiths phrased it "China and the United States cannot afford to leave incident management to chance or instinct. The stakes are too high."

Prof. Peter A. Dutton, an associate professor of strategic research in the China Maritime Studies Institute at the U.S. Naval War College.

Dr Michael J. Green, holds Japan Chair and is a senior advisor at CSIS, in addition to being an associate professor of international relations at Georgetown University.

Captain Bernard “Barney” Moreland, USGC, is the senior analyst for the US Navy’s Pacific fleet.

Dr. Su Hao is a professor in the Department of Diplomacy at the China Foreign Affairs University, Director of its Center for Asia-Pacific Studies.

Dr. Wu Shicun is president of and a senior research fellow at the National Institute for South China Sea Studies (NISCS)

Dr. Guifang (Julia) Xue is the director and professor of the Law of the Sea Institute, Ocean University of China (OUC)

Rear Admiral Yang Yi, former director of the Institute for Strategic Studies of the National Defense University of the Chinese People’s Liberation Army

Dr Toshi Yoshihara is an associate professor of strategy & policy at the U.S Naval War College.

Dr. Yu Wanli is an associate professor at the School of International Studies and a member of the academic committee of the Center for International and strategic Studies at Peking University.

Prof. Zhuang Jianzhong is the deputy director of the Center for National Strategy Studies of Shanghai Jiao Tong University (CNSS)

Dr. Andrew S. Erickson is an associate professor in the strategic research department at the US Naval War College.

Dr Lyle J. Goldstein is an associate professor in the strategic research department at the US Naval War College.

Dr Nan Li is an associate professor at the US Naval War College.

Posted by Coatepeque at 9:50 AM

The Chinese should hire Captain Owen Honor to train them on carrier operations and how to cooperate with the US. He might be willing to help China learn how to get along with the west since it seems his current job may be taken away soon...

I think that's the major problem with China. They don't know how to provide transparency to the west to reassure us of their claimed peaceful intentions.

Well, I am sure he will be welcome, the Chinese just don't view PC as the same as the Americans.