I guess all those ex-USSR carriers China procured are not romantic enough for the lovers' promenade in Guangzhou.

Gutted, defanged and now up for sale, HMS Invincible may soon be towed to China and berthed near a "lovers' promenade" in waters the Royal Navy dominated during the opium war.

A UK-based Chinese businessman, Lam Kin-bong, has bid £5m for the decommissioned aircraft carrier, which he wants to turn into a floating international school in a new marina on the coast of Guangdong province.

If the bid – first reported in the South China Morning Post — is successful, the voyage east of the 17,000 tonnes of scrap warship would be one of the most dramatic symbols yet of the shift in economic and military power from west to east.

For Britain and China, the differing fortunes are increasingly stark. In its recent spending review, the UK government slashed the defence budget and announced the navy would be without an aircraft carrier capable of carrying jets for around a decade. The Ark Royal will be decommissioned this month.

China, by contrast, has been increasing military spending at a double-digit pace for more than a decade and is believed to be building its first aircraft carrier, with plans for at least four more over the next 20 years.

Even the US is concerned. Reports earlier this week suggest China is close to test-flying a new stealth fighter jet and has operational capability with a "carrier killer" anti-ship ballistic missile.

The fate of the Invincible is likely to be symbolic rather than strategic. The light aircraft carrier was decommissioned in 2005, after 28 years of active service, including action during conflicts in Iraq, Yugoslavia and the Falklands. Now stripped of its engines, armaments and technology, the 500-metre-long hull was put up for auction last month by the Disposal Services Agency.

Its proposed new home is in Zhuhai, part of a province formerly known as Canton that was the beachhead for British opium dealers after the trade was forced on China by the Royal Navy.

Several bids were reportedly made before the deadline on 5 January. The Ministry of Defence has yet to respond to requests for details of rival offers.

The £5m bid by Lam – made through his company Sunway Yacht Ltd, which is based in his birthplace, Zhuhai, Guangdong province – is considerably higher than the £2m that had been expected. Towing the vessel to the other side of the world and refurbishing it as a school is likely to cost another £6m.

Whether the deal is approved is another matter, given the European Union's arms embargo against China, and Beijing's past use of second-hand carriers.

In 1998, a Hong Kong firm won a Ukrainian navy auction for the old Soviet carrier Varyag, claiming that it would be used as a floating casino off Macau. Instead, it is being upgraded at China's Dalian naval shipyard, fitted with combat sensors and defensive weapons, and painted in the colours of the People's Liberation Army. Military analysts say it is likely to go back into service.

It would be harder to use the Invincible in the same way as it has been more thoroughly stripped. China has bought two other Soviet carriers – the Minsk and the Kiev – which are merely attractions.

Lam, who moved to London nearly 20 years ago and has since set up the the Wing Wah chain of restaurants in Birmingham, said suspicions were unfounded.

"My intentions are purely commercial and have nothing to do with the military. We are building a marina in Zhuhai and if my bid is successful our first option is to berth the carrier there and convert it into an international school to help foster communication and cultural ties between China and Britain," he told the South China Morning Post.

If permission to tow the vessel to China is withheld, Lam said he would dock it in Liverpool and turn it into a school "to boost the understanding of China and the Chinese in Britain". He said he had the support of the Chinese embassy in the UK. 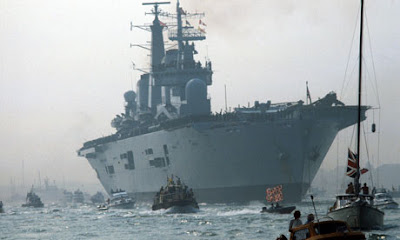 Posted by Coatepeque at 9:18 AM

Oh. Thats an excellent idea. Having an ex-UK aircraft carrier floating on the Liverpool docks with Chinese colors will surely improve understanding!