Cheap propaganda tick or holding up half the sky, your call. 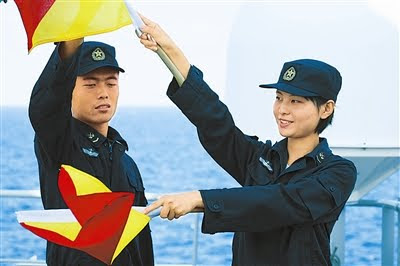 At 10:20 on January 25, in the cabin of the “Qiandaohu” warship of the 7th Chinese naval escort taskforce implementing escort mission in the Gulf of Aden, Chen Chen, a female university-student sailor, piloted the warship steadily to sail along the escort route. Up to now, all the 14 female sailors who are included in the warship operational duty posts of the escort taskforce in the first batch have initially possessed the capacity in performing duty on their own.

It is learned that now in the world, all naval ships of major countries have female sailors to implement ocean-going training and combat tasks. Previously, the Chinese female soldiers going out with the naval ships mainly serve as medical worlers, interpretors and cultural workers. In June 2010, the Navy of the Chinese People’s Liberation Army (PLA) decided to include female sailors into the combat duty posts on the three warships in the 7th naval escort taskforce, in a bid to cultivate female sailors capable of fulfilling combat duties.

In early September 2010, the East China Sea Fleet of the PLA Navy selected 14 female soldiers with outstanding comprehensive quality from hundreds of female soldiers in several troop units and assigned them to such posts of the naval ships as signal, telegraph, radar, steering and sail-and-cordage.

During the nearly 3-month-long ocean-going escort operation, the 14 female sailors smoothly passed the assessment of actual professional operation, initially possessing the capability in performing duty on their own.

Seeing the 12 Chinese and foreign merchant ships sailing safely under the escort of the Chinese naval ship she was piloting, Chen Chen said excitedly, "I never thought that I could get a ‘piloting license’ of naval ship in the Gulf of Aden."