The PLAN is taking the next logical step as a naval power -- sending a warship to protect its citizens abroad. Is this the slippery slope towards greater military involvement in conflicts outside of China?  Well, it seems that may depend on your political point-of-view. 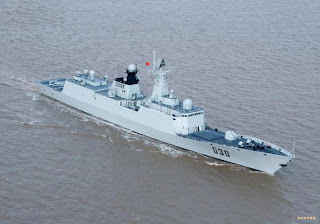 By Royston Chan and Tom Miles

SHANGAI/BEIJING Feb 25 (Reuters) - China has so far evacuated 12,000, or about a third, of its citizens from turmoil in Libya, many of them workers for Chinese-run projects and businesses in the oil-rich nation, official media said on Friday.

The mass evacuation effort, supported by a Chinese naval frigate, is the latest test for a government that has encouraged companies to seek business across the developing world, often in conditions considered too dangerous, difficult or poorly paid for Western firms.

Relieved workers arrived on a charter flight to Shanghai on Thursday, and some told Reuters they were working at a university construction site in the eastern city of Tobruk that was attacked by armed looters.

The Chinese workers stayed at a Tobruk hotel for two nights before the local staff and embassy officials arranged for cars to ferry them to the Egyptian border.

"We were lucky because we managed to rent eleven cars and all 83 of us got in with our luggage. Then we made our way to the Egyptian border," said 33-year-old construction worker Mao Yanjun.

The latest evacuation figure reported by China's Xinhua news agency means around two-thirds of the 36,000 Chinese who live in Libya may still be there, where a nationwide wave of protests against Gaddafi has met a fierce response from his security forces. Some European governments say thousands of people have been killed.

"China has suffered large-scale direct economic losses in Libya, including looted work sites, burned and destroyed vehicles and tools, smashed office equipment and stolen cash," the ministry said in a statement on Thursday.

CNPC has said some of its project camps and operating sites were attacked, without giving details. The ministry said some Chinese had been injured but there were no reports of deaths.

Vice Foreign Minister Song Tao gave the latest update on the number of Chinese evacuees as he prepared to welcome 224 Chinese off the first chartered plane sent to pick up stranded citizens, mainly engineers and technicians working on oil and railway projects and their families.

Workers said they were thankful their local staff were alert to the dangerous situation and said things could have been much worse for them if they had not left Libya.

"I was frightened. The local staff helped us make our way out," construction worker Lu Xuedi, 46, told Reuters. "We would have been afraid to get out (on our own)."

Nearly 1,000 Chinese crossed over into Tunisia on Wednesday, and a Maltese ship capable of carrying more than 2,000 people arrived to evacuate Chinese nationals from the Libyan port of Benghazi on Thursday. It is expected in Malta later on Friday, Xinhua said, citing the Chinese ambassador to the island state.

Chinese nationals have also been evacuated from Libya to other countries in the region, including Greece and Egypt.

China has also sent a frigate to provide support and protection for ships involved in the evacuation, Xinhua cited China's Defence Ministry as saying.

The frigate was previously part of the "Xuzhou" fleet, which is escorting ships in the Gulf of Aden, where shipping is vulnerable to attacks from pirates.

(Writing by by Tom Miles; Editing by Ken Wills and Miral Fahmy)

The Chinese naval escorts actually make a lot of sense since the rescue ships will have to transit the Suez Canal on the way back to Asia.

This is the shortest way home, longer routes such as those around southern Africa and the Cape or through the Drake passage are just too long to be feasible.

The southern exit from the canal leads to the Red Sea and hence exits into the Indian Ocean via Horn of Africa and the Gulf of Aden.

Somalia and it's infamous pirates are just off the Horn - to the south, as Somalia is on the northeast coast of Africa.

Those pirates have been known to travel as far as India's Malabar coast to hijack civilian vessels.

Aside from Somali pirates there are also numerous South-East Asian pirates along Malacca Straights.

Escorts therefore are not merely prudent but rather absolutely necessary - can you imagine how many potential hostages a single ship carries?

china demostrate every day that it itsn't a power to be afraid of, it is demonstrating to all of the westerners like me that they're the future.