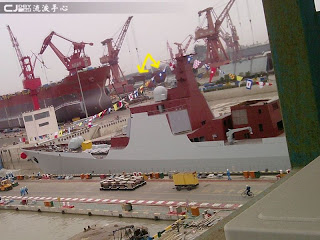 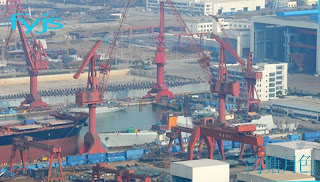 Combining the information from photography with the schedule for 052C production provided in post # 665 in the carrier thread, it is possible to obtain a rather good picture of the workings of Jiangnan shipyard and the rate of construction to be expected.

The yard will reportedly be repeating the exercise 2013-15, with the short interval probably being taken up by submarine and/or minesweeper construction.

Now, the Jiangnan warship complex – which is apparently named Dock 4 – has two two-bay building halls, of which Hall 1, to the left, is taller than Hall 2 to the right. I shall number the bays Berths 1-4 from left to right. Only Hall 1 opens to the launch basin.

When 052C+ Hull 1 made its appearance last summer, it was on Berth 2, while the WOZANG class was on Berth 3, from where it moved laterally in front of Hull 1 prior to being launched 18 November. In late summer, 052C+ Hull 2, which was building on Berth 4, began a similar lateral move, replacing Hull 1 on Berth 2 after the launch of the latter. The taller Building Hall 1 is required for mounting the superstructures. At present, Hull 2 appears to be much in the same stage of completion as was Hull 1 when first seen, which is compatible with a May launch.

The hull sections that were seen west of Hall 1 have no doubt now entered Hall 2 to form Hull 3. In all likelihood, a new MCM vessel has similarly replaced the WOZANG on Berth 3.

It is interesting to compare these sections with the drawing of a dissected 052C in post # 836. The hull is divided into nine sections, which may well be correct. However, when seen in the open, the sections appear to be larger. For instance, the bow section seen to the left of Hull 2 while it was being rolled out appears to comprise Sections 1 and 2 of the drawing.

I have stuck to the Type 052C+ designation to distinguish the new ones from the original two 052C. So far, I have not noted any visible differences.

Hopefully, all of this is not too confusing. Thanks to GT for posting the dissected drawing and the launch photo of Hull 1 – a pity that the VLS aft is not visible. And thanks to Szczepanski, who was beaten to this photo, for quoting me.