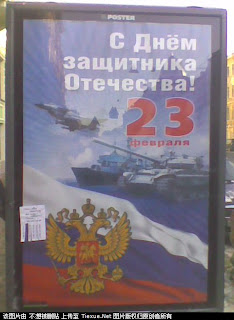 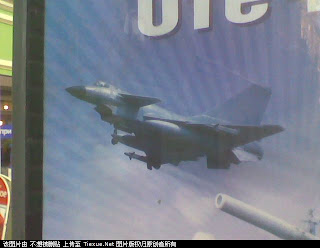 Posters displayed in the northwestern city of Saint Petersburg showed a plane against a national flag. But instead of a Russian jet, it was in fact a Chinese Chengdu J-10, or Vigorous Dragon.

The slip, reproduced in around 250 posters, was an error by the designer, who was unfamiliar with military planes, said the head of the city's media committee, Alexander Korennikov.

"It was the designer's fault. If you are not a specialist in military hardware, it is an easy thing to do," he said.

"The problem was that the images were printed and put up before being checked and agreed with the media committee."

The mistake was spotted at the end of last week and the posters were due to be removed by the end of Tuesday, on the eve of the holiday, Korennikov said.

On Wednesday, Russians celebrate the Day of the Defenders of the Fatherland, a public holiday when women traditionally give cards and gifts to men who served in the armed forces, although it has lately expanded to include all men.

Posted by Coatepeque at 1:42 PM

At the Zhuhai Airshow, there was a big adertising over he entry gate. It showed a pilot's helmet visor reflecting the aircrafts of an aerobatic patrol. But those aircrafs were not those of the Chinese team. They were the aricraft of the French Team.

And in the 1980s there was a billboard ad campaign for Camel cigarettes based on/parodizing the movie TOP GUN; the planes shown in the ad were Soviet Sukhoi Su-15 FLAGONs.

This happens every year in Russia. Last year they had the Iowa class battleship on the poster for Navy Day.