Global Times' writeup on the J-15

Keep in mind this is not a quality writing up from a questionable tabloid, it cited no official sources, amount to nothing short of mere speculation. I posted it as an excuse to share some of the more recent J-15 photos. 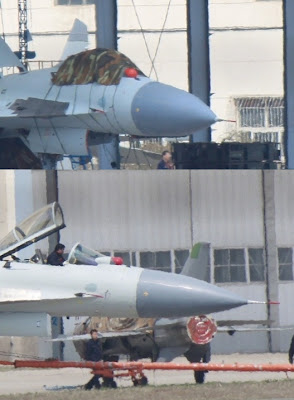 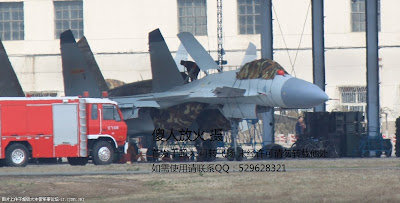 "They can carry many air-to-air missiles or air-to-surface missiles and other kinds of airborne munitions," Lan told the Global Times. "And they have the benefit of long combat radius."

The fighters are to be stationed onboard the Chinese Varyag aircraft carrier, which is under renovation in Dalian, according to defense media. The giant ship has had radars and electronic warfare equipment installed, the Canada-based Kanwa Daily News reported.

on Sunday's photos of the fighter were taken outside the airfield of the No. 112 Factory of Shenyang Aircraft Industry Corporation, a company of the Aviation Industry Corporation of China (AVIC), and were uploaded onto the cjdby.net and fyjs.cn military forums after 1:30 pm on Sunday.

Videos and smaller photos showing the fighter flying over Shenyang had been circulating on the Internet since June. This time the fighter was seen with a standard naval paint scheme, according to photos released on Sunday.

The fighter has distinctive features that enable it to operate on an aircraft carrier, such as folding wings and strengthened landing gear, according to the Chinese Military Aviation (CMA).

Missile launch rails and wide-angle holographic Head Up Display (HUD) clearly indicated that the fighter is equipped with domestic sensors, avionics and weapon systems, the website reported, just like later models of the Shenyang J-11 fighter. The fighter dubbed J-15 is based on a Russian Su-33 in terms of structural configuration, it also said.

The Russian Ria Novosti news quoted a Russian military analyst saying that China's J-15 is inferior to the Russian aircraft.

"The sensors, avionics and missiles of the Su-33 are already obsolete," Lan said, adding that the Chinese airborne electronics could offer more advanced technologies.

The first prototype J-15 was believed to have made its maiden flight on August 31, 2009, a month before the 60th anniversary of the founding of the People's Republic of China, according to the Russian Ria Novosti news.

on Sunday's photos came at about the same time as foreign media quoted a Chinese blogger claiming a Vertical/Short Take-Off and Landing (V/STOL) shipborne fighter for the Varyag is conducting flight tests in the Inner Mongolia Autonomous Region, the US-based Defense News. The foreign reports were dismissed by an AVIC spokesman as pure speculation on April 18.

Posted by Coatepeque at 6:40 PM

The last pic surprised me!

It clearly shows that the little mini-canards are indeed moveable surfaces.

Its a pity there is no overhead, plan view that will allow us to see clearly the parting line and hinges of the folding wings.

Biological weapons are more lethal and deadly than the others..
Information Exchange..: Anthrax. The culprit...