It reads "China, my mother"  中國,我的母亲 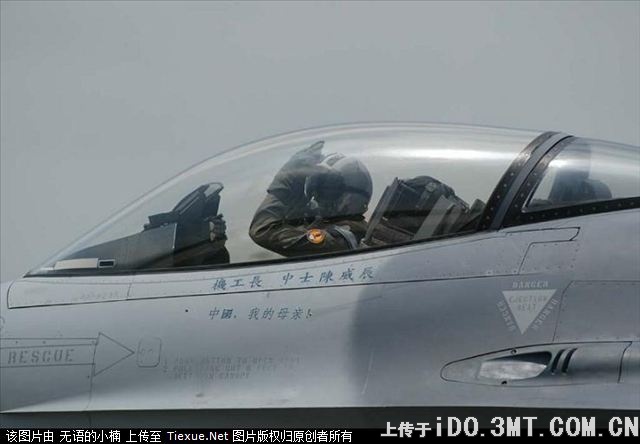 TAINAN, Taiwan — The Taiwanese air force used a closed-off motorway as a runway on Tuesday in a rare drill simulating a Chinese surprise attack that had wiped out its major airbases.

The scenario for the exercise, which involved more than 1,300 soldiers, was a conflict with China in which aerial bombardment had paralysed major military airports, the air force said.

The exercise is part of a series of war games stretching over a five-day period and codenamed "Han Kuang 27", or "Han Glory 27".

"In today's scenario we assumed most of Taiwan's military airbases were severely damaged in an attack by missiles from the People's Liberation Army, and fighter jets could not return to their home bases," Colonel Lee Wen-yu, an air force spokesman, told reporters.

"Because of that we needed to convert some sections of the freeway to serve as emergency runways... and for that purpose, we need to check the standard procedures, like clearing up the road surface, setting up communications networks and installing plane arrest cables."

Six jets -- two F-16s, two Mirage 2000-5s and two Taiwan-built Indigenous Defence Fighters -- landed on a motorway near Tainan city, where they refuelled and loaded with missiles and other ammunition before taking off again.

The drill kicked off in the pre-dawn hours amid heavy fog and mist, but the officers overseeing the exercise eventually decided visibility was acceptable.

To ensure the planes could land safely, large number of soldiers were ordered to carry out a blanket search for stones or other small objects on the road.

Several cars also drove along the motorway, releasing high-frequency sounds to scare away birds that might be sucked into the turbines of the jets.

An AH-1W SuperCobra attack helicopter, an OH-58D Kiowa Warrior scout helicopter and a CH-47 Chinook transportation helicopter from the army were also mobilised for the manoeuvre, Lee said.

Taiwan conducted the first such exercise in 2004 and a second one in 2007, both while the anti-China Democratic Progressive Party was holding political power in the island.

Taiwan regularly stages war games simulating possible attacks by China, which still claims the island as part of its territory and refuses to renounce the use of force to take it back, prompting the island to continue its military modernisation.

Ma, the initiator of detente with the island's giant neighbour, said last week Taiwan was unlikely to engage in an arms race with China, but stressed that the island still needs a small and powerful deterrent to offset the mainland's military might.

Taiwanese experts estimate that China has more than 1,600 missiles aimed at the island and has recently deployed a new type of ballistic missile despite improving ties.

Taiwan has ruled itself since the end of a civil war in 1949. Tensions between the two former arch-rivals have eased markedly in recent years under the island's Beijing-friendly government.

Note: The actual writing is in traditional Chinese 中國

It doesn't matter how it's interpreted, a lot of Chinese still think of themselves as Chinese, just not Chinese ruled by CCP government. Don't forget that Taiwan is always the first to help when mainland suffers natural disasters, and no one cares more than Taiwan during Tiananmen Square incident. This is a historical problem left from Cold War similarly to N/S Korea and N/S Vietnam. In this case, it's N/S China. Both are Chinese, but have different political bodies and still help out each other, despite of differing ideologies, similar to how South Korea is always the first to help when North needs them, even though the leaders of two sides want each other dead.

I read somewhere that it's photoshopped? Because the word "mother" is in simplified Chinese? Can somebody confirm? I don't mean to sound doubtful to the love they have for their motherland =)

mike, i think you could be right about the Photoshopping, the second part of the word mother is simplified, 母亲 vs. 母親

So.... all the cross-Pacific defence talk between Taipei and Washington we had a few months ago seems to have ended. Does this mean that the ROCAF won't be seeing any new F-16s anytime soon?