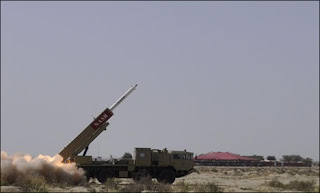 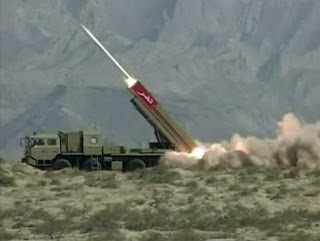 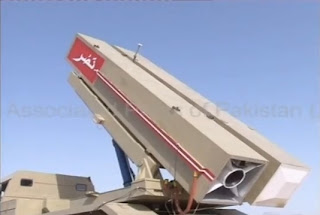 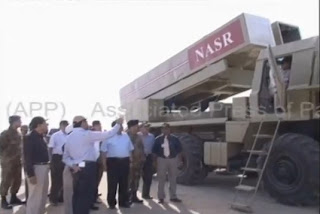 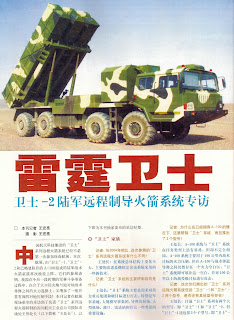 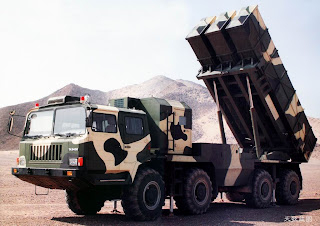 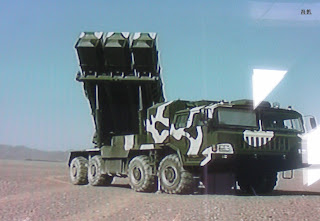 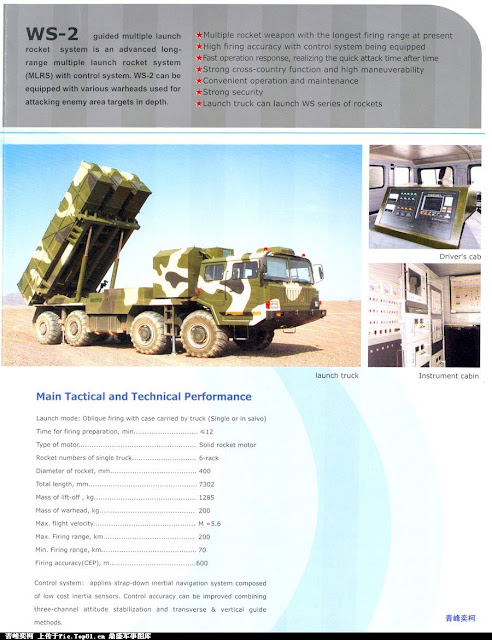 [Pakistan test-fires Hatf-IX]
RAWALPINDI: Pakistan on Tuesday successfully test-fired a newly-developed short-range surface-to-surface nuclear-capable missile, according to an official announcement by the Pakistan Army. The multi-tube ballistic missile, Hatf-IX (Nasr), is a 60-km range missile that has been developed to add deterrence value at shorter ranges to Pakistan’s Strategic Weapons Development Programme. The missile has been developed with shoot-and-scoot capability. The test was conducted from an unidentified location.

Strategic planners term the test a ‘new and very significant development’ since the missile falls in the category of tactical nuclear weapons. “This is a low-yield battlefield deterrent, capable of deterring and inflicting punishment on mechanised forces like armed brigades and divisions,” said an expert in the field of missile technology. “This takes care of the Indian Army’s obsession with finding space for limited war under the nuclear umbrella.”

Addressing the gathering at the undisclosed location, DG SPD Kidwai said the test was a very important milestone in consolidating Pakistan’s strategic deterrence capability at all levels of the threat spectrum. He said in the hierarchy of military operations, the Nasr Weapon System now provided Pakistan with short-range missile capability in addition to the already available medium- and long-range ballistic missiles and cruise missiles in its inventory.

The president and prime minister have congratulated the scientists and engineers for their outstanding success and warmly appreciated the successful test.

Posted by Coatepeque at 8:43 PM

I think the pakistan version is a tactical ballistic missile rather than a multiple rocket launch system.

what you've seen somewhere must be in china seen a year before in russia or somewhere else. LOL...remember its china, you know what that "C" goes for.

but its true pakistan does co-produce , co-develop or simply acquire chinese weapons many a times but this missile is not a MBLR system, its not a rocket, its a ballistic missile. oops, bad blind eye comparison this time i guess.

so is the WS-2 SSM a tactical nuke one? the pakistani system has only 2 rockets compared to 6. i think it is the same truck but a different rocket ( missile)

If we assume that Hatf-IX 'Nasr' is in fact installed on PHL03? TEL and take a look at the Chinese WS-2 using same chassis and carry 6 400 mm rockets and do a bit more digging you will get values around 500 to 600 mm for the Hatf IX Nasr Ballistic Missile System .

you can clearly see that Box Tubes used Hatf IX Nasr are much bigger and i think that diameter of the Hatf IX Nasr is more in range of 600 mm rather then 300-400 mm.

This is make perfect sense if see the nose section of the missile in this Picture of Hatf IX Nasr which seems to be he new re-entry vehicle uses a triconic aero-shell geometry (some times also called baby bottle design) to improves the lift to drag ratio for themissile and have control surfaces on it.

Diameter of 600 mm also make sense as Hatf-I & Hatf 2 Abdali' diameters are similar, so one can assume that Pakistani scientist would have found it easier to use an existing rocket motor with modifications rather then building new one from scratch.

If the rocket diameter is bigger. Why is the quoted range of Nasr only 60km vs 200km for WS-2 according the picture of the brochure? Typo somewhere or bigger payload for Nasr?

I thought Chinese military expert would know better. Why? because every chinese system that is displayed is always claimed to be a copy e.g J 10=Lavi and J 20= Mig 1.44.

Type99,
Your ignorance amazed me. If you claim J20 is a copy of Mig 1.44, then the same logic goes that F22 is the exact copy of F15 (because they have similar design of wings, cockpit, and air intakes, etc....)

w.r.t half-IX, not attempt to downplay the achievement to nuke arm it, but the motor is enlarged WS-2 design..... the mid-course correction is clearly based on the A-100 (examine the firing ports near the cone)

I was being ironic? I was saying Chinese military expert should relise what he is sayng is similiar to what indians and westerners always claim about chinese weapons.

Like i said before with diameter of around 600 mm Pakistan already have rocket motors in shape of Hatf-I & Hatf 2 Abdali' so litle chance of buying a design icreasing the diameter (almost as painfull if not more as to design a new rocket motor.)

Hatf IX Nasr follows depressed trajectory rather than following a ballistic trajectory to maintain higher speed during most of its flight, evade early detection and give less time to react to any anti-ballistic missiles in the target area.

This depressed trajectory also allows the missile to change its altitudes & direction more quickly during flight but all this comes at the cost of reduced range.

China is a great friend of Pakistan and will remain so but not everything produced in Pakistan is bound to be a Chinese product.

my friend you do know that Pakistan have very extensive ballistic and cruise missile program.

Beside Hatf-IX 'Nasr' uses INS and terminal guidance and first Pakistani missile to do so was Shaheen-1 back in 1999.