Recently, tensions have sharpened in the South China Sea as a result of territorial and resource exploration disputes over the Spratly Islands, primarily amongst the PRC, Vietnam, and the Philippines. In the latest turn of events, the RoCN has unexpectedly deployed missile boats to patrol the Spratlys and stationed armored detachments on RoC-controlled islets in the region, ostensibly with the enthusiastic approval of Beijing, as articulated (here)

In doing so, it seems that Ma Yingjiu and the KMT have - as of this moment - turned out to be the biggest winner of all relevant parties in the nuanced political theatrics of this dispute. Internally, it would be difficult for the DPP to oppose this move, since Ma is taking tangible steps to protect and reaffirm "Taiwan's sovereignty". Across the strait, he is winning friends both inside Zhongnanhai and on the street, for he appears to be sabre rattling on Beijing's behalf, but simultaneously outshining the CPC in the eyes of more hawkish Chinese patriots through an overt and determined show of force (compared to Beijing's less provocative deployment of a single maritime law enforcement vessel). Other Southeast Asian contestants of the Spratlys would also be hesitant of strongly opposing the RoCN's latest maneuvers, since - from a realist perspective - it would not be wise on their part to drive Taiwan and the Mainland toward more overt and sustained policy coordination in the Spratlys dispute.

This show of force has allowed the RoC to demonstrate relevance (domestically on both sides of the strait as well as regionally in South East Asia) and consolidate territorial claims at minimal risk and political cost. Well played!
-- Mr.unknown 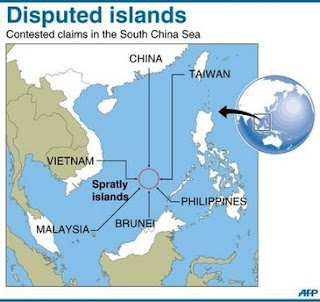 
TAIPEI — Taiwan is planning to deploy missile boats in the South China Sea and tanks on disputed islands as regional tensions mount over territorial differences, a military spokesman said Sunday.

Taiwan's defence ministry said it feared coastguards now stationed in the Spratlys, claimed by several nations, and the Pratas islands, claimed by China, may not be sufficiently heavily-equipped to handle potential conflicts.

"The missile boats and tanks is an option we've offered to the coastguards," he said, without specifying numbers and adding that the coastguard had yet to make a final decision.

Local media said the missile boats' presence would serve as a deterrent.

Each of Taiwan's 47-tonne Seagull class boats is armed with two Hsiungfeng I missiles, a ship-to-ship weapon with a range of 40 kilometres (24 miles).

Taiwan on Saturday reiterated its claims to the Spratlys, along with three other island groups in the South China Sea, amid a flare-up in regional tensions over rival claims.

Taiwan, Vietnam, Brunei, China, Malaysia, and the Philippines claim all or part of the Spratlys, which could lie on top of large oil reserves.

The Taiwanese coastguard currently has a 130-strong garrison on Taiping, the biggest island in the Spratlys archipelago, which has a runway to smooth logistical support.

The Philippine military in April said it planned to use a new US-made vessel to boost patrols in the disputed waters, after a complaint about Chinese patrol boats harassing a Philippine oil exploration vessel in the area.