After reaching joint missile production (here) and coordinated sea patrol deals (here) with Indonesia, the PLA is leaving China for their first joint military exercise with the Indonesian military. It must be nice to be courted by powers in that region (here) .

China to provide US$8 billion for RI infrastructure projects 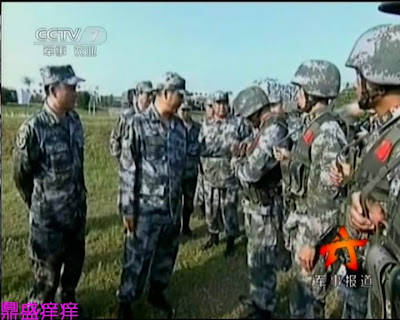 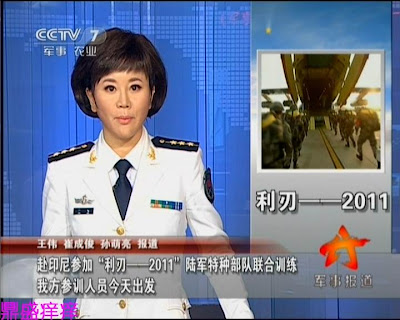 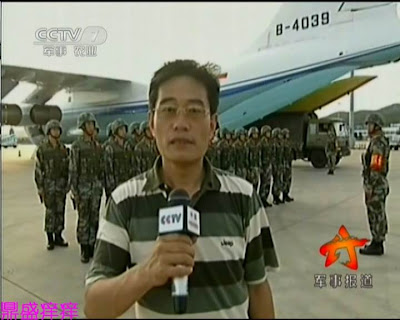 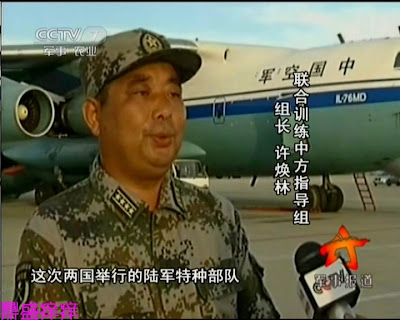 Indonesia and China have agreed to strengthen their defense cooperation, including in the joint-production of missiles, a defense ministry official said.

Spokesman of the Indonesian Defense Ministry Brig.Gen.I Wayan Midhio said here Tuesday the two parties had paved the way for going ahead with the joint-missile production.

Speaking to newsmen after witnessing the signing of a memorandum of understanding on the two countries` technical cooperation in the defense sector, he said Indonesia was already using Chinese-made C-802 missiles.

The missiles were used by the Indonesian Defense Forces (TNI) to equip some of its warships, he said.

"We have agreed on a possible joint-missile production in the future through PT.Pindad (strategic weaponry industry)," he said.

The MoU was signed by Deputy Defense Minister Sjafrie Sjamsoeddin and Head of the Chinese Technological and Industrial Development Agency Chen Qiufa.

China has been recognized internationally as a nation that is not only successful in developing its economy but also its military power.

That country, as noted by sinodefence.com, has been able to develop a medium-range ballistic missile (MRBM) called "DongFeng 21" (DF-21, NATO code name: CSS-5).

Indonesia and China are planning to conduct coordinated patrols in the South China Sea to prevent illegal fishing by Chinese fishermen in Indonesian waters.

Indonesian Defense Minister Purnomo Yusgiantoro said that initially, the two countries would establish a joint committee to serve as a legal platform for a range of defense cooperations, including coordinated patrols under direct “navy-to-navy talks”.

“The direct naval talks will cover a lot of issues, including on fishing vessels. [Chinese] fishermen often encroach into Indonesian waters, but that’s because they don’t have GPS [global positioning system] devices so are unclear of where the boundaries are,” Purnomo said late Friday after a dinner to welcome visiting Chinese Defense Minister Liang Guang Lie.

“Under a coordinated patrol, if those fishing vessels accidentally cross the border, we will inform them to leave. But please note that we don’t have any bilateral problems [with China],” he was quick to add.

Liang held a bilateral meeting with Purnomo and an informal meeting with other ASEAN defense ministers on the sidelines of the ASEAN Defense Ministers’ Meeting last week.

Purnomo said he had ordered Deputy Defense Minister Sjafrie Sjamsoeddin to draft an agreement with Chinese Ambassador Zhang Qiyue for the establishment of the joint committee.

He added that Indonesia had already established similar joint committees with the US and Malaysia.

He said Indonesia was already engaged in coordinated patrols with Malaysia, Singapore, the Philippines, India and Australia.

“In direct naval talks, we will later discuss numerous issues such as coordinated patrols, cooperation in surveying, or hydrographic surveys, joint exercises and exchange of personnel for training,” Marsetio said. “All this is also aimed at enhancing cooperation in anti-piracy efforts.”

Apart from the direct talks, China has also offered to conduct coordinated patrols with ASEAN member states to escort merchant vessels from the region through the Gulf of Aden as part of joint anti-piracy efforts.

Purnomo welcomed the offer, but did not disclose whether Indonesia would accept it.

It is estimated that piracy causes the world community to suffer between US$13 billion and $16 billion in annual losses.

The International Maritime Bureau Piracy Reporting Center, a Malaysia-based NGO, said in a report released April 28 that there were 173 attacks of piracy and 23 hijackings worldwide so far this year. The attacks and hijackings involved 26 vessels and 518 hostages held by
Somali pirates.

DENPASAR, Indonesia -- In the tussle for influence in Southeast Asia, the United States and China have long been competing for Indonesia's affections. The strategically positioned, resource-rich archipelago is a prized partner in an era of fuel shortages and the global war on terror. But Washington and Beijing have lately expanded their courtship of Jakarta from the traditional areas of trade agreements, foreign direct investment, market access and technical assistance, to increasingly include offers of military hardware and military cooperation.

This three-way dance began in 2005, when China and Indonesia announced their "Strategic Partnership." At the same time, the U.S. partly normalized military-to-military ties with Indonesia after an embargo imposed in the 1990s due to the human rights abuses in East Timor by the Indonesian military (TNI).

Beijing took an early lead in this race for influence. The Indonesia-China Strategic Partnership marked a breakthrough in the relationship between the two giant neighbors and sent alarm bells ringing in Washington. The agreement sought to expand the political, cultural and military-security aspects of the bilateral relationship. In terms of the latter, in particular, it committed the two countries to developing each other's defense industries, establishing a defense consultation mechanism, and increasing cooperation between their law enforcement and intelligence agencies in the fight against transnational security threats.

In 2006, Indonesia-China Defense Security Consultation talks were inaugurated, causing significant concern in Washington. The warming ties between Jakarta and Beijing led to two Chinese warships visiting Indonesia in March 2007, the first such visit in more than 12 years.

A draft agreement on defense cooperation was then signed in the second Defense Security Consultation Talks a month later, covering defense technology cooperation, exchange of military students and the possibility of further arms sales to Indonesia.

In January 2008, the two countries further agreed to cooperate in the joint production of military transport vehicles and aircraft, to be developed by the two countries' state-owned defense industries. The same year, China's NORINCO and Indonesia's Pindad signed a deal to jointly develop rocket launchers and accompanying ammunition. An agreement was also reached on setting up a TNI-PLA cooperation committee, with a view to arranging joint military and training exercises.

China's charm offensive, however, has led to little tangible results, as the Jamestown Foundation's China Brief argued last year. For all the talks, no contractual production agreements have been signed thus far. Sino-Indonesian military exchanges have also been limited, and no more large orders of Chinese-manufactured military hardware have been placed by Jakarta.

One potential explanation for the slowdown is the United States' renewed efforts to restore relations with Indonesia. Though the groundwork had been laid in previous years, the speed with which the U.S. moved to regain the upper hand in the contest for Jakarta's sympathies over the last 12 months has been quite remarkable.

In March 2010, a U.S. Air Force technical team carried out critical in-country safety and maintenance reviews of the Indonesian air force's of U.S.-built aircraft. This was followed by the signing in early June of a wide-ranging agreement -- the Framework Arrangement on Cooperative Activities in the Field of Defense -- intended to integrate existing defense collaboration between the two countries, according to a press release from the U.S. Embassy in Indonesia.

The same month, U.S. Ambassador to Indonesia Cameron R. Hume inaugurated a $56 million program to fund production of coastal and shipboard radar systems at the Batam Regional Maritime Command Center. The systems included 16 coastal radars, 11 shipboard radars, one set of headquarters equipment and two regional command centers, according to information on the official Web site of the U.S. embassy.

In July, the U.S. Embassy in Jakarta told Jane's that it was processing a range of Indonesian requests for services and equipment from the U.S. Department of Defense. It also indicated that Washington intended to position itself as a key military supplier to Indonesia.

Just what that meant became clearer when Indonesia Defense Minister Purnomo Yusgiantoro expressed Jakarta's intention to buy U.S.-built F-16 and C-130H Hercules aircraft during a bilateral meeting with U.S. Secretary of Defense Robert Gates in Jakarta on July 22. The purchase would be funded by the Foreign Military Financing (FMF) program, a U.S. grant provided to foreign governments to fund the purchase of U.S.-made weapons, services and training.

After the lifting of the U.S. military embargo, Indonesia received nearly $1 million in FMF funds in 2006. That has climbed to $20 million this year.

While in Jakarta, Gates also announced that Washington had lifted its ban on cooperation with Kopassus, the TNI's controversial special forces. The restriction had been the last remaining embargo on bilateral military-to-military ties.

But Washington's reversal of fortune does not mean that Beijing is accepting defeat. China has designated 2010, "The Year of China-Indonesia Friendship," to mark the 60th anniversary of the establishment of diplomatic relations. High-ranking Chinese officials have already traveled to Jakarta this year to propose, among other things, the establishment of a joint council to facilitate increased levels of joint military production. Beijing has also offered additional C-802 anti-ship missiles as well as a range of naval vessels.

While Jakarta is considering its options, there are rumors that Yudhoyono may ask for an increase in Indonesia's FMF allocation when U.S. President Barack Obama visits Indonesia later this year. Against such a backdrop, Obama -- who spent part of his childhood in Indonesia -- will find it difficult to refuse.

Fabio Scarpello is the Southeast Asia correspondent for the Italian news agency Adnkronos International. He is based in Denpasar, Indonesia.