PLA researcher Chen Deming says the system itself is one of the keys of China's domestic defense capabilities.

"The Ballistic missile defense system is a critical link in our strategic defense, and is also an important chip in the contest between big powers. It makes a world of difference whether you have it or not." 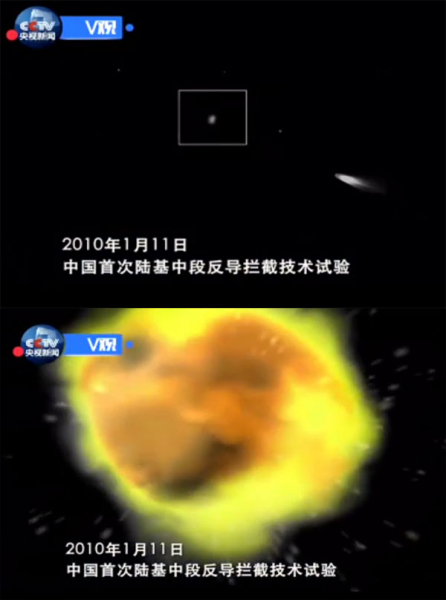 Screenshot of the footage released by Chinese authorities shows China's first successful test of the ballistic missile interception system on January 11, 2010. (Photo/CRIENGLISH.com) The anti-missile system has undergone more successful tests since 2010, including another test in January of 2013.


Footage of the original test has been released on the heels of the U.S. and South Korea agreeing to deploy the advanced U.S. THAAD anti-missile system before the end of next year.

While the U.S. insists the system is to defend South Korea from possible attacks from North Korea, Chinese officials have condemned its planned deployment, saying it threatens China's security.

China's Foreign Minister has warned his South Korean counterpart the THAAD deployment also diminishes the level of trust between the two countries.
Posted by Coatepeque at 9:55 PM