All dressed up and nowhere to go

At 10:15 a.m. local time (0415 GMT), the chiefs of the general staff of the armed forces of China, Kazakhstan, Kyrgyzstan, Russia and Tajikistan ordered the start of the drill, which is to be participated by 5,000 troops from the five countries.

The exercise is the seventh of its kind organized by the SCO members in recent years, and is scheduled to conclude on Sept. 25.

It also aims to showcase SCO member states' mutual trust and pragmatic cooperation, their shared wish to protect regional peace and stability and to boost common development and prosperity, he said.

According to Geng, along with the chiefs of the general staff, defense ministers of the SCO member states would also be in Kazakhstan to observe the war game.

Chinese armed forces have participated in anti-terrorism drills under the framework of the SCO since 2002. 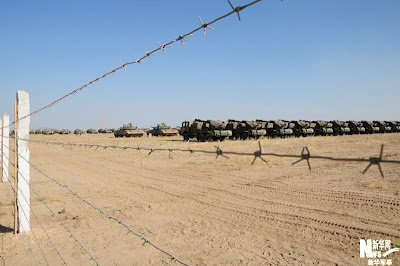 Posted by Coatepeque at 7:54 PM

this much firepower, that's some terrorist group.