For the past year, a persistent rumor has been floating around suggesting that the PLAN is building a new 8000 tons class of DDG. Those two photos taken by HSH in Shanghai last week confirmed that a new large warship is indeed under-construction. However, it is unclear if that is the rumored Type052D DDG or just a follow-on to the Type052C. 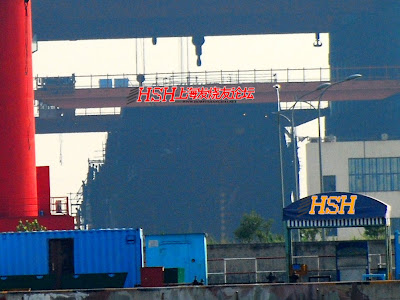 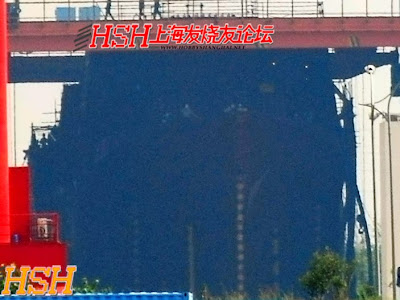 Beijing plans to build a new generation of large destroyers as part of its effort to develop a blue-water navy, a report from an official ship-building institute shows.

The new generation of destroyers is important to China's long-term goal of building and operating aircraft carriers.

“As China pursues the goal of building a high-seas naval force with far-reaching capabilities, it needs large-tonnage destroyers,” Andrei Chang, editor-in-chief of the Kanwa Defence Review based in Canada, said. “Only heavy destroyers with more than 10,000 tonnes of displacement are capable of carrying new, supersonic anti-warship missiles with a striking range of 500 kilometres.”

The report said the new destroyers would be another “trump card” for the PLA Navy. They would exceed the largest mainland-made destroyers in service by almost 4,000 tonnes, indicating an overall improvement in combat potential. The planned ship is even larger than the four 8,000tonne Sovremenny class destroyers that Russia has sold to China.

While the Sovremenny destroyer was a typical cold war-era Soviet design, with a large profile that made it easily detectable by radar, the new destroyer would feature “fully developed stealth technology”, the report said. Most of its weapons systems and sensors would not be exposed externally, making the ships harder to detect on radar.

The warship would also carry a large number of weapons systems and sensors, as well as sophisticated electronic warfare and defence equipment, the report said.

The most important of these was a new, supersonic anti-warship missile with a striking range of 500 kilometres. The report said the PLA hoped the new destroyers could close the gap in combat capability between the Chinese and Western navies.