China has chosen the Royal Australian Navy as its partner for what are being called the most intense war games with a foreign power in the nation's history.

China has never allowed Western media onto one of its navy ships during live target practice before but times are changing.

The ABC was granted exclusive access aboard Chinese Navy frigate Luoyang as it took part in the exercises on the Yellow Sea off northern China.

Luoyang's 80 millimetre guns opened up on a target almost three kilometres away. Smoke filled the Yellow Sea air after each firing.

Also firing was the Australian frigate HMAS Waramanga, which is also taking part in the joint exercises.

Chinese lieutenant commander Tony Cao is happy with the result.

"We had very good cooperation today," he said.

"I think that shows our relationship."

After criticism it is too secretive about its military build-up, China is on a charm offensive and has chosen Australia as a partner to show the world its intentions are peaceful.

One reason for the change could be military tension between China and the United States.

China is unhappy about US arms sales to Taiwan and Commander Cao says Americans are refused invitations to take part in joint naval exercises.

"If the United States stops selling the weapons to Taiwan and stopping spying us with the air or the surface, I think that will do good to the communication and to the cooperation between our two countries," he said.

Commander Bruce Legge, the Australian frigate's commanding officer, says even though Australia is a close ally of the United States, tensions between Washington and Beijing are not any of his business.

"Well I don't even think it's necessary to have the US here because it allows Australia to just concentrate on working together," he said.

"You know we're working very closely with China, we certainly don't need America to do that and you can see just how forward we're moving with this."

But as an Australian Seahawk helicopter performs a daring winch manoeuvre hovering above the flight deck of the Chinese frigate, it seems that dispute is ancient history. 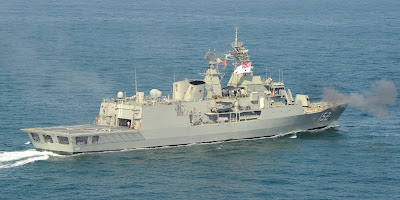 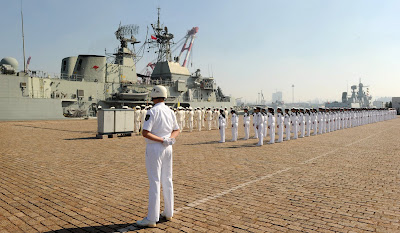 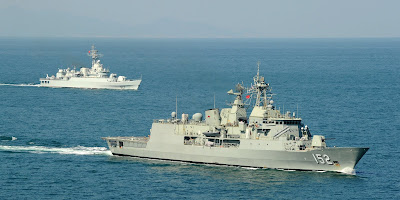 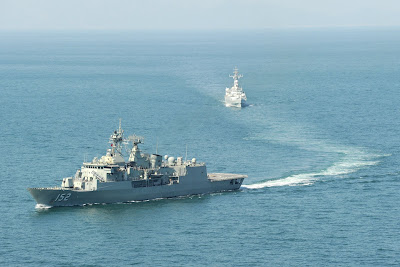 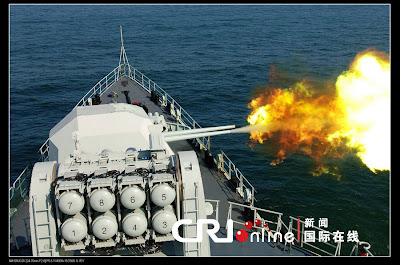 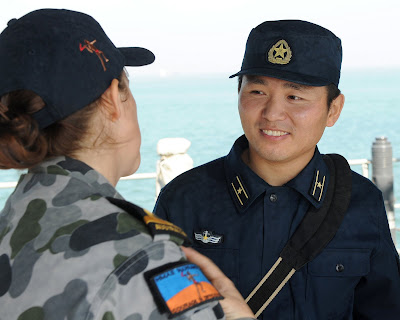 A weeklong joint naval drill between the People's Liberation Army Navy of China (PLAN) and the Royal Australian Navy (RAN) is underway in the Yellow Sea, media reports said Friday.

According to chinanews. com.cn, the PLAN frigate Luoyang and the RAN frigate HMAS Waramanga conducted a live-fire exercise Thursday off the coast of Qingdao, Shan-dong Province.

According to the Xinhua News Agency, the exercises wrapped up the Australian war-ship's four-day visit to Qingdao. Its next stop will be the city of Zhanjiang, Guangdong Province, where more naval exercises will be conducted.

"Both warships exercised live-firing, which was rare in previous naval drills attended by the PLAN," Senior Colonel Huang Xueping, spokesperson of China's Ministry of National Defense, told chinanews.com. cn. "At the same time, a group of Chinese warships are visiting Australian coastal cities. This is the first simultaneous naval-exchange between the two militaries."

"While we are used to operating with other nations from our region, this is the first time we have undertaken such a complex exercise with the Chinese, and we are looking forward to building on this experience," Legge told the website.

"There is nothing more effective than working closely together in a military exercise to build trust and friendship between navies and nations," Legge added.

The RAN also has a naval drill with the Republic of Singapore Navy in the South China Sea starting September 18.

"The RAN welcomes the constructive contributions that the PLAN has made to regional security to date," Vice Admiral Russ Crane said. "Australia is committed to developing strong and positive defense relations with China."

ABC News also reported that the US Navy was refused an invitation to take part in the joint naval exercises with the PLAN.

The 17-day drill, which began September 9, is aimed at testing the interoperability of the SCO armed forces in rendering assistance to a member state involved in an internal armed conflict or subjected to a terrorist attack.

More than 300 military vehicles and over 50 combat aircraft and helicopters from China, Russia and Kazakhstan are being employed. China has sent 1,000 troops.

Posted by Coatepeque at 9:55 PM

Truly smart and cool-headed thinking on behalf of the Aussies.
It would be a good time for them to start reconsidering their alliances I think...it's probably a good idea to start approaching the next sole superpower...
Especially since it looks like this one is coming to stay unlike the current "sole superpower" which was but a short-burning flare in human history and is already on the decline.
And they don't have much time to do all that bonding either...no more than half a century I reckon which is not terribly long when it comes to international relations

Really loving the blog & visit me