According to MarketPlace.org (here) the international piracy insurance is now worth approximately $100 million.

Stephen Askins is a maritime lawyer with Ince & Co. He says once a ship is hijacked, its owners rely on a whole host of attorneys and negotiators to get it and the crew released. And the bills can add up quickly. A $4 million ransom may actually be a $15 to $20 million problem.

On a related note.

The PLA navy has displayed a fresh appetite to confront pirates plaguing vital sea lanes off the Horn of Africa, breaking up recent attacks on shipping with stun grenades and machine-gun fire.

State media reports and CCTV military broadcasts have highlighted an incident on August 28 when three waves of fast-moving pirate skiffs attempted to attack a convoy of 21 commercial ships under PLA escort.

The incident comes in a high-profile week for China's rapidly modernising navy, with ships fresh from unprecedented exercises in the Mediterranean sailing up the Irrawaddy River to stop in Yangon, Myanmar, while another crossed the Coral Sea to visit Vanuatu and Tonga as part of a Pacific tour.

Helicopters launched from the 17,600-tonne Kunlunshan and the destroyer Lanzhou helped repel the pirate skiffs, with marines firing stun grenades and heavy machine guns to warn off the pirates, who later fled the area.

At one point a skiff came within less than a nautical mile of the freighter Haijie, the PLA Daily reported, but was chased off. Special operations troops were then placed aboard the slow-moving ship for extra protection.

Just as it marked new tactics from the pirates, who attacked the convoy at several different points in a battle that lasted more than 30 minutes, it also revealed higher levels of organisation and co-ordination from the PLA.

While the incident was not witnessed by foreign navies, PLA officials have outlined the incident to their international counterparts in the anti-piracy fight.

"From everything we can tell, it was a very successful operation," said one Asian naval official monitoring China's anti-piracy effort. "They seem more highly organised and eager to intervene... There was no panic. The pirates were persistent but driven off without loss of life."

Gary Li, a PLA analyst at the London-based International Institute for Strategic Studies, said the sailors involved "seemed much more co-ordinated and cool-headed than before ... and certainly prepared to use force to ward off attacks". "They seem determined to use the Kunlunshan to its best advantage," he said.

The Kunlunshan is one of the most closely watched of China's new warships. The 200-metre ship is the only one of its kind in the PLA fleet and believed to be central to any plan to invade Taiwan, able to carry large helicopters, fast patrol vessels and even hovercraft.

Its appearance off the Horn of Africa comes ahead of the first anniversary later this month of the successful hijacking of a Chinese coal carrier.

The De Xin Hai was boarded by pirates as it sailed from South Africa to India and held at a stronghold on the Somali coast for more than two months pending the settlement of a ransom.

So far, it is the only Chinese ship captured since the PLA joined international anti-piracy efforts in December 2008 - the first time Chinese warships have entered a potential conflict zone outside home waters in six centuries.

While the PLA continues to escort convoys of ships mainly from greater China, including Hong Kong, it has yet to join international patrols of a special transit zone in the Gulf of Aden.

Such a move would force even closer co-operation with a range of international navies under American and European leadership and would pave the way for China to jointly chair co-ordinating sessions - another first for a once-insular PLA.

China has offered to head up the sessions but PLA officials have told their counterparts that they are still waiting for political approval from Beijing before pushing ahead with the plan.

Russia and India, eyeing a suddenly expanded PLA role in a highly strategic area, are also pushing for greater involvement.

"We are in uncharted waters in terms of co-operation at this point," a European naval officer said. "These are fresh relationships and everybody is still feeling their way... everybody is trying to be very patient." 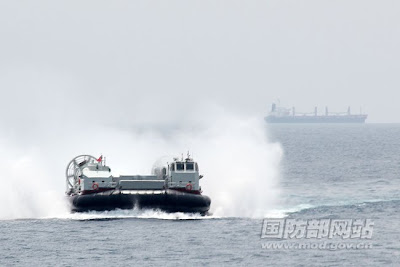