Anyhow, the Hong Kong Garrison and Norinco's "sales rep" can use more firepower. This could not have come at a better time with the crime rate going up and all. 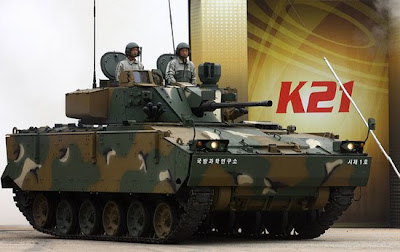 HONG KONG - Hong Kong's customs agents said Sept. 23 they had seized a tank bound for South Korea after the high-tech amphibious military vehicle was discovered at one of the city's container terminals.

Officials intercepted two containers on Sept. 20 carrying the unlicensed tank and accessories, the customs and excise department said in a statement.


"Preliminary investigation shows that the tank and the accessories were shipped from Saudi Arabia to Busan, Republic of Korea with transshipment via (Hong Kong) after an exhibition. Further investigation is ongoing.

"All seized offending articles are subject to mandatory forfeiture," it added.

Doosan DST, the South Korean weapons manufacturer that produced the K-21 tank, said the seizure was due to a missing customs document, adding that it would send the form to Hong Kong by Sept. 24.

The tank arrived in Hong Kong after being shown to potential clients in Saudi Arabia, the company said.

The South China Morning Post said the vehicle was a disarmed version of the K-21, one of the most advanced land weapons under development in Asia. No arrests have been made since the seizure, it reported.

South Korea's foreign ministry could not be reached for comment.

The seizure comes after South Korea's defense ministry said it was investigating design flaws in the light tanks, which were launched late last year, the Post said.

A South Korean soldier died in July after the 26-ton vehicle he was traveling in sank during a river crossing, the Post said.

Some media reports suggested a faulty pump was to blame for the accident.

The tank was developed over a decade by the South Korean defense ministry and local defense firms, the paper said.