If Chinese S&R helicopters are being sent to Pakistan, it marks the first foreign "non-joint exercise" deployment of the PLA LH.

China will also send more troops and army helicopters for rescue operations in the flood-ravaged country, the Dawn quoted Jian, in a meeting with Pakistan Prime Minister, Yousuf Raza Gilani, as saying.

Jian also delivered a special message from the Chinese Prime Minister to his Pakistani counterpart.

Earlier, US President Obama's special envoy to Pakistan and Afghanistan, Richard Holbrooke, had criticised Beijing for not doing enough to help Pakistan, and had appealed to them to "step up to the plate" to help Islamabad to cope with the floods, which have submerged nearly one-fifth of the country.

Pledging more aid for flood-hit Pakistan, China had said it would be sending more relief material for the thousands of people affected by the worst deluge to have hit the country in the past 80 years. (ANI) 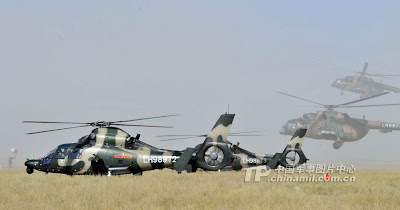