China launches second aircraft carrier after a £9.6m refit... as a luxury hotel

Days after sea trials for China's first aircraft carrier Varyag caused heightened tension in the South China Sea, a second carrier is stirring up interest in the country. But the Kiev, although like the Varyag a former Soviet aircraft carrier, is welcoming guests in its new role as a leisure facility.
Former Soviet heavy aircraft carrying cruiser Kiev has been part of a military theme park since 2004. Now it is a luxury hotel

Billed as China's first aircraft carrier hotel, the Kiev has undergone a £9.6million refit, reports the South China Morning Post. In 1996 the retired warship was sold to a Chinese company, and has been part of a military theme park in north China's Tianjin municipality since 2004.

'Even though China's first aircraft carrier has now gone on sea trials, it will be quite hard for the public to ever visit it. I guess people can come here to fulfil their curiosity.' Designers have shunned standard naval decor in favour of a more luxurious feel. One room is dominated by a vast white circular bed, with silver lamé drapes and a cowskin rug.

There are five lavish presidential suites in all, targetting guests who are curious to try a sea-themed hotel with a difference. Prices to stay in the converted aircraft carrier have yet to be set, but the lavish interior suggests the hotel will appeal to the more well-off clientele.

For the past few weeks, Chinese state television and online military news websites have been following the preparation of the Varyag on a daily basis. China's first aircraft carrier set sail for the first time on Wednesday, raising concerns among China's neighbours.

The ship has become a symbol of China's rising military power. As yet it remains to be seen what the Kiev symbolises for the country. 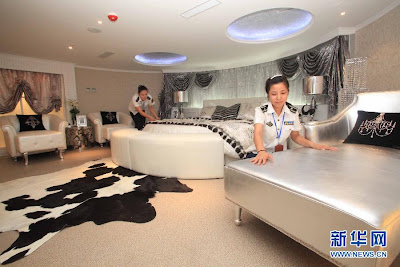 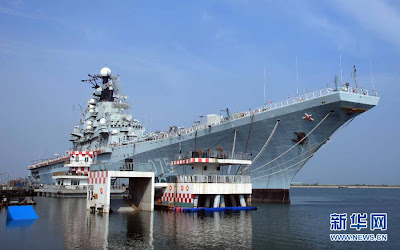 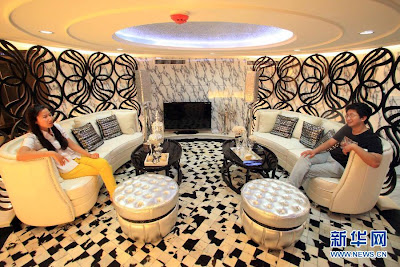 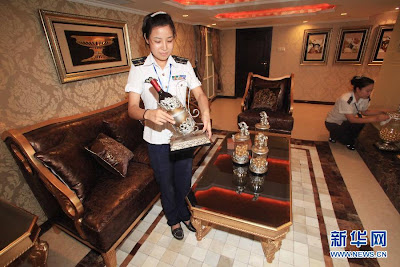 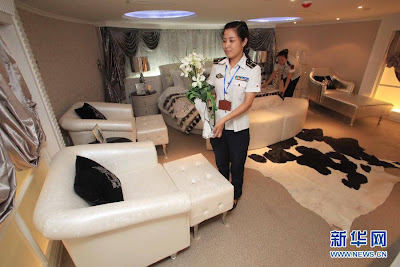