While the impact of a Chinese aircraft carrier is still subject to speculation, much remains unknown about its Roles and Capabilities. However, that does not prevent profiteering pundits (both in and out of China) from selling books and memorabilia to the public that stoke nationalist sentiment. If anything, they are the clear winners of China’s military buildup, and good for them. 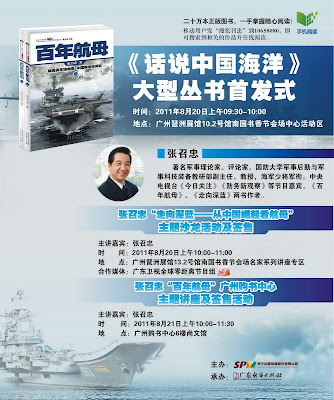 Posted by Coatepeque at 9:40 AM

Profiteering or not, Zhang Zhaozhong does some pretty good work breaking down & simplifying complex military concepts to lay-people.

I think it is finally becoming clear that China will build carriers and build up its navy regardless of whether foreigners like it or not. Of course......initially China has to appear humble and give good reasons for doing this.