Here is a recent article from the South China Morning Post (here) that has been floating around in the blogosphere suggesting that Major General Li Xiaoyan is PLAN's first carrier skipper.   However, writing for the July 1st issue of the China Brief (here), Russell Hsiao argues that Capt Bai Yaoping is the likely candidate.   Speculations, speculations, but only time will tell.

Bai Yaoping is widely speculated to become the Chinese carrier commander. As a member of the class of ‘87 at the Guangzhou Warship Academy, most of the students who attended this class are close to their 50s, and to varying degrees have set the Navy’s standard as potential commanders. They are at a prime age and experience; most of them hold military ranks that are above colonel or senior colonel  (here to the China Brief write-up) 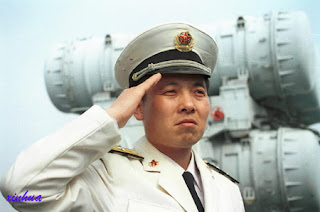 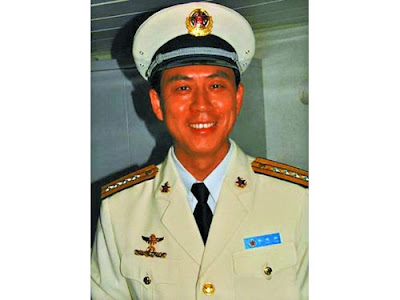 With his extensive experience in the disputed South China Sea and his knowledge of warship operations, Major General Li Xiaoyan has shown himself to be a strong candidate for the position of captain of the nation's first aircraft carrier, the Varyag.
Li, 50, who started his military career in the air force, is widely tipped by mainland media to fill the post.

He said in 2002 it was necessary for China to build its own aircraft carrier when he visited the Minsk, a Soviet aircraft carrier that was turned into a military theme park in Shenzhen after being retired from service in 1995.

During the visit, he inspected the cockpit of the Minsk, familiarising himself with the components of the retired aircraft carrier, according to a report in Oriental Outlook, a magazine published under Xinhua.

On Monday, the Shanghai-based Oriental Morning Post, citing unnamed sources, reported that Li was expected to be the captain of the Varyag and would be helped by three vice-captains.

Li and seven other officers were trained at the Guangzhou Naval Academy, starting in 2008, before moving to Dalian in December of last year to work on tasks related to the new aircraft carrier, the newspaper said. Macau-based International Military Association president Antony Wong Dong said: "Li is comparatively more suitable for the top job on the Varyag because he has been the captain of some large military vessels over the past year. He is more familiar with the operation of warships."

Li, born in 1961 in Changchun , Jilin province , entered the preparatory school for the air force in 1979. In 1987, he was among 10 pilots admitted to attend a warship captaincy class in Guangzhou for three-and-a-half years.

He was appointed captain of the Jiangmen frigate in 1995 and went on to earn a master's degree at the N.G. Kuznetsov Naval Academy in Russia in 1999.

A year later, he became captain of the destroyer Shenzhen, aboard which he carried out diplomatic naval visits to overseas ports in the Pacific, Indian and Atlantic oceans.

"Li helped promote the image of the PLA during his overseas visits," Wong said. "This adds credibility to his profile."

Li became leader of a team under the South China Sea fleet in 2004.

Some analysts said the South China Sea experience was one of Li's biggest advantages, because the Varyag may be deployed to the disputed waters.

Posted by Coatepeque at 8:22 AM