The following two PLA daily articles reinforce what we already know; PLA is training to extend its line-of-control in the South China Sea in time of war by both air and sea elements. In addition to having the C3I capability to mange a 100 aircraft maritime strike/patrol package, they also moved the CP to a naval ship and build up logistic support in dual-course, while those attempts are not impressive by NATO standard, but it is their first acknowledgment in open sources related to this new found capability.

The bottom line; it has been a long time planning for the PLA to have a multiple-layers of defense parameters manned by aircraft, submarine, and surfaces warships around the South Sea Fleet to protect it’s transport fleet in case they have to deal with "internal problems of a run-away province". Such planning is based on the hard lesson learned from the 1996 Dongshan "missile test"; they had to swallow their pride, when US deployed two aircraft carriers to the Taiwan Strait to stop the "missile provocation" and PLA was powerless mount a response. After 13 years of patient build up, can today’s PLA stop a US carrier task force near China’s Taiwan Strait? Let’s hope we will never find out.

Another item to note, PLA did not utilize their AWAC to perform command functions in this exercise. PLA’s AWAC fleet was used to coordinate hundreds of helicopters and civilian and military transports during the Sichuan Earthquake; clearly it has the capability to direct a 100 aircraft fleet, hopefully we can see them in action during the next exercise to form a more complete assessment.


Photo from PLAdaily of a South Sea Fleet task force taken during a 17 days exercise in June. 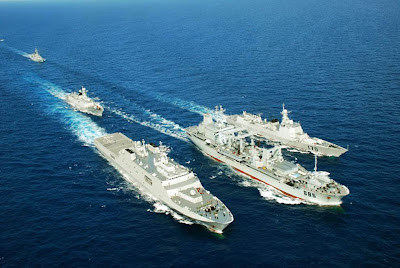 Recently, the attack and defense confrontation and open sea combat actual-troop exercise of the air force of the Guangzhou Military Area Command (MAC) in complicated electromagnetic environment was staged. More than 100 different types of warplanes took off from several airports at the same time and flew to the designated targets on ground and the depth of the open sea to carry out open sea patrol and systematic attack and defense exercise.

In the exercise, the air force of the Guangzhou MAC integrated the existing information-based command means and collaborative training platform and established a mobile commanding team on board of the warship. Through the information-based platform, the commanders can learn such information as the location, height and speed of each warplane and issue orders to any warplane, adjusting military strength in an easy way.

The exercise showed that such training subjects as combat patrol and systematic confrontation in open sea and maneuver tactics airdrop of the aviation troops can be carried out in a multiple of air spaces and at different directions at the same time by relying on the information-based command platform.

By Li Guowen and Zeng Baoyu

How to realize rapid rush repair of the warships in long-distance navigation? To tackle this problem, a research institute of the Armament Department of the PLA Navy has finally built a military-civilian integrated technical support system and information network for remote maintenance covering naval warships, warship equipment support organs and support agencies at all levels, relevant higher learning institutions, research institutes and local industrial departments by relying on the naval and national defense communication network, offering a reliable information-based cooperation platform for realizing the precision support for warship maintenance in open sea.

The system integrating a multiple of technical resources scattered in naval and local industrial departments in the network platform enables rear technical experts to directly offer technical support to the front. Therefore, it has tackled the space-and-time restriction of site rush maintenance, ensured warship navigation at the time of overcoming malfunctions, resulting in improvement of maintenance and support efficiency, reduction of maintenance and support expenses and increase of the warship availability and battle effectiveness.

By Jiang Yi and Chai Yongzhong

Some equipment is very simple to manufacture and easy to operate, while others are much more complicated not only to create, but their operation many times requires skilled personnel who have been required to acquire specialized training to run the equipment.