You want to know for the past 10 years, now here is the answer.

One of those meaningless and stupid trivia question that has to be answered -- yes J-10 can perform a Pugachev's Cobra Maneuver. This cool look’in ACM has absolutely no actual combat values, but who cares, as long as it can entertain spectators at airshows.

In order to perform the Cobra the pilot reduces speed to approximately 275 knots in level flight, then he must disable the AOA limiter on the Flight Control System, as this serves to limit the airplane to angles of attack not exceeding 30 degrees in normal flight. Once this is accomplished, the pilot sharply pitches up the nose of the airplane. If the speeds are right and the pitchup is done properly, the aircraft will rotate around its horizontal axis until the nose is past vertical - the single-seat fighter can achieve between 110 and 120 degree AOA! - while continuing to move in its prior flight path as the maneuver is too quick and there isn't enough energy to allow the airplane to climb as it pitches up. Once the pilot has reached the desired attitude, s/he sharply increases throttle and releases the stick. The airplane has managed to rotate back past vertical on the initial rotational energy of the pitchup maneuver; once it approaches vertical, however, the rear half of the aircraft (now the 'lower' half) generates much more drag than the front (or 'top') half due to the larger cross-section of the wings and stabilizers. This will cause the rotation to stop and then reverse, the nose pitching sharply 'down' relative to the airframe, back into level flight. The throttle added during the maneuver will, if done properly, prevent the airplane from losing any altitude during the process. In sum, the maneuver should take no more than a few seconds. The aircraft will exit the maneuver at around 135 knots, which means it is in a fairly precarious position until it gains airspeed. 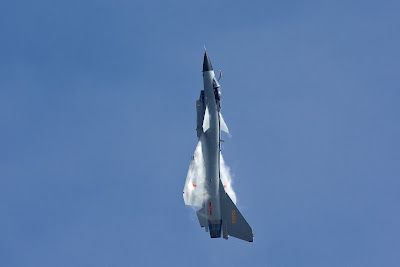 I found this article claiming further production of JH-7 and JH-7A as well as a $1.4bn deal on the purchase of more Su-27SK from Russia. What are your thoughts on this?

really, how old is this article? The deal failed apart with the Shangyang J-11B program. Reads like something out of 2002!


Meanwhile, in another development, Russia and China have clinched a deal to
have more Su-27SK fighters assembled at a Chinese aviation plant for China's
Air Force.


The official said that it was likely that China would want to put new
engines on the JH-7 in the 2004-2006 time frame, but that these dates were
not fixed. China would insist on at least having full repair and maintenance
capacity for these engines, he said. Ideally, what they would want "is step
by step to reach 80 per cent capacity of building the M53 engine themselves,
10 or 15 years down the road."