It has been reported by the current issue of JDW under the title of "Pakistan to receive first Sword-class frigate from China in August" that Pakistan is considering acquiring four Type 054 Class FFG after the four Sword Class (F-22P) have been delivered. I am not able to find any other sources to confirm that claim; while the sword class is not state-of-the-art, but it make sense in light of its intended purpose of replacing the old British Leander class FFG and more importantly to kick start Pakistan indigenous Warship building capabilities and know-how at Karachi Shipyard and Engineering Works. However, four new Type054, on the other hand, will significantly boost Pakistan's Naval power as for the first time its naval task force can operate under an area air defense umbrella.

So, if anyone can provide another creditable source of the Type054 purchase, please share.

ISLAMABAD, Jun 4 (APP): Pakistan Navy would receive first of four state-of-the-art Frigates F-22P type in August this year while the second one in December-09 from China. “Construction of first two ships has already been completed and will be delivered to Pakistan Navy in August and December this year after successful completion of on going trials,” a media release issued by Pakistan Navy said here on Thursday.

“Weapons systems to be installed on first ship have been successfully demonstrated at the optimum performances and ranges,” the media release said.

Construction of the third F-22P Frigate is also progressing as per schedule. This ship has been successfully launched at Shanghai on May 28, 2009 in an impressive ceremony attended by both Pakistani and Chinese dignitaries.

Construction of fourth ship was started in March this year at Karachi Shipyard and Engineering Works and will be delivered to Pakistan Navy in April 2013.

Pakistan Navy is acquiring four new F-22P class frigates under collaboration with China as first three ships are being constructed at Hudong Shanghai and last one at Karachi Shipyard and Engineering works.

F-22P frigates are equipped with modern weaponry and sensors.

Each ship of them will carry Anti-submarine Z9EC helicopters.

First batch of two helicopters has arrived in Pakistan.

Induction of F-22P frigates will not only enhance the war fighting potential of Pakistan Navy but will also strengthen the indigenous ship building capability of the country. 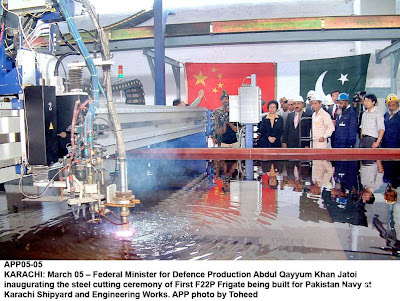 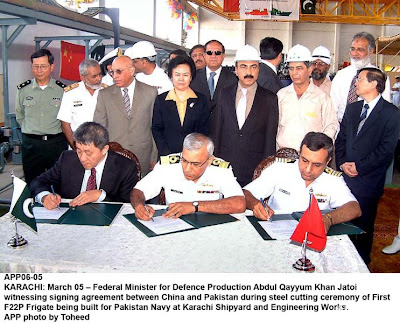