The article "China revives production of JH-7 strike aircraft "http://www.thenews.com.pk/daily_detail.asp?id=181808 " is making around in the normal internet channels and has been rebutted and discredited as most of the claims are either incorrect or outdated. The news here is not the article, but rather Global Times' response.

Here are some examples:questionable claims stated by the article.

Meanwhile, in another development, Russia and China have clinched a deal to
have more Su-27SK fighters assembled at a Chinese aviation plant for China's
Air Force.

The following up Su-27SK deal was canceled in 2006 only after a short 96 production run by Shengyang Aircraft company in favorite of the domestic J-11B program.

The official said that it was likely that China would want to put new engines on the JH-7 in the 2004-2006 time frame, but that these dates were not fixed.

China has received the last batch of Rolls-Royce Sprey MK202 turbofan engines between 2004 and 2004 and installed them to the improved JH-7A program.

The article is too lame to be commented here initially; but to my surprise, Global Times fires back a rebuttal. Global Time, is a newspaper operated under People's Daily which launched back in April 2009 as China's attempt to win greater influence abroad thought media.

At any rate, the rebuttal is news by itself as Chinese media normally shy away from direct response against specific articles and stay in the "He says, She says mode". They picked on a low hanging fruit this time, let's see if they will became more aggressive over time. As a side note, they published two front page articles related to Tiananmen on June 4th 2009. (Here) (Here) 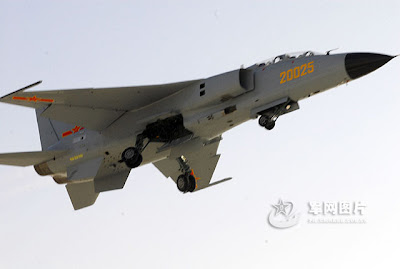 Reports on China's intention to cooperate with aircraft engine makers in the UK and France to improve the performance of the turbofan of PLA fighter bomber JH-7, are denied by the chief designer of the aircraft, Chen Yijian, Academician of Chinese Academy of Engineering. According to Chen, China has also already fixed problems with the JH-7 turbofan, Hong Kong newspaper Ta Kung Pao reported.

Also known as the Flying Leopard, JH-7 initially used the WS-9 Qinling turbofan, which were from turbofans produced by the Rolls-Royce Spey company in the UK. But after years of research, China has fixed problems with the turbofans of Flying Leopard on its own, according to Chen.

Chen went on to say that China's research on turbofans is still lagging behind compared with some other countries, especially the turbofans of large aircrafts. China has been calling for more research talents to help solve this problem. He said the third generation of China's fighter bombers, including the J-8 series, J-10 series and the Flying Leopard, have taken shape of a combatant power, and will appear in the Military Parade to celebrate the 60th anniversary of the nation.

Posted by Coatepeque at 8:47 PM

Also known as the Flying Leopard, JH-7 initially used the WS-9 Qinling turbofan, which were from turbofans produced by the Rolls-Royce Spey company in the UK.