The airborne troops of the PLA Air Force are in parachute training on the plateau. (Photo by Wang Tong)

On August 9, an airborne troop unit under the Air Force of the Chinese People’s Liberation Army (PLA) carried out its first organic and large-scale parachute drill on the Qinghai-Tibet Plateau.

At 08:00 of the very day, a group of aircraft carrying 600-plus fully armed parachutists flew over the airborne landing site at a place of the northwest plateau in China. At that time, the resultant wind velocity was 6 meters per second and the surface wind speed was 9 meters per second. At 08:55, the aircraft flew near the airspace of the dropping area. As soon as the parachutists landed on the ground, they immediately started their combat deployment and unfolded offensive towards the pre-determined area. It is learned that to organize organic and large-scale parachute drill on the plateau, the airborne troops face various difficulties, since the air is thin, the oxygen content in the air is only half of that at sea level and the parachute airspace is in the strong wind belt stretching for thousands of kilometers, posing a great threat to the safe landing of the parachutists.

Yao Hengbin, general director of the parachute drill and commander of the troop unit, told the reporters that in view of the plateau climate features, his troops conducted adaptability training in advance. During the training, the troop unit worked out various emergency response preplans and overcame 10-odd difficulties caused by unstable ground wind direction, shortage of oxygen and prolonged time of parachute opening.

According to Fan Xiaojun, political commissar of the Airborne Force of the PLA Air Force, this plateau parachute drill participated in by the airborne troops holds great significance. China is a mountainous country. Many high maintains with an elevation of above 3,000 meters are scattered in the border areas and most areas are inconvenient for traffic. The success of the first organic and large-scale parachute drill in the plateau area shows that the parachute troops of the PLA can go to the frigid mountainous areas to implement combat tasks at anytime in case of emergencies there.

By Wang Haitao and Zhao Qigang 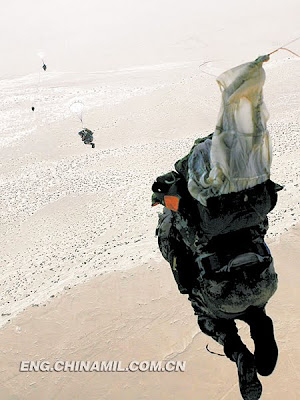 Posted by Coatepeque at 7:26 PM